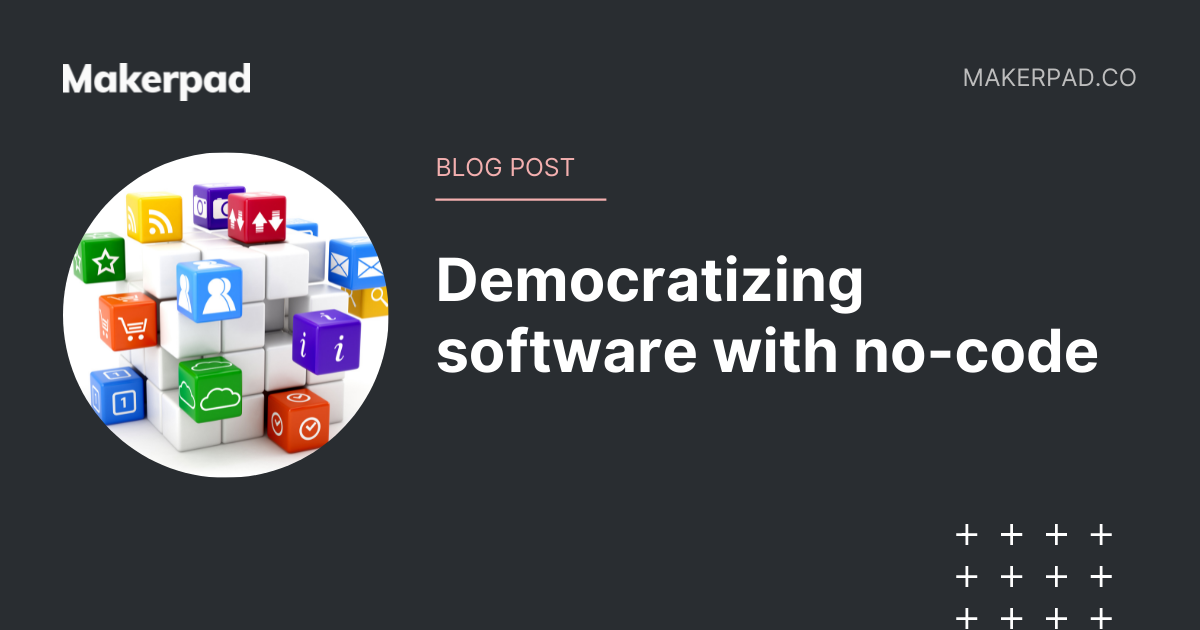 This blog post was guest authored by Maxi Tommasi.

No-code tools are disrupting software development the way Shopify has disrupted ecommerce building. Today, who would think of creating an ecommerce site using code, right? Before Shopify, people had to code (yes, code!) to build their ecommerce business.

Five years ago, when I launched my second (failed 🙂) business Henlein, a fashion watch brand in Argentina, I built the site myself using Shopify in less than a week, despite having zero coding skills.

Several other software use cases like website and app building, workflow automation, data analytics, database construction, chatbots, and more, are slowly but surely becoming “no-code by default” in the same way that ecommerce is today.

Why is no-code so important?

Less than 1% of the world’s working population are software developers, and no-code is on a mission to disperse the power of software into the hands of the other 99%. NYU Professor, entrepreneur, and marketing guru Scott Galloway has described a trend he calls “The Great Dispersion,” in which the value of an industry or offering is being increasingly “dispersed” to the end consumer.

No-code can be thought of as the dispersion of software development. End users (entrepreneurs, innovators, employees, product managers, etc.) who previously needed to hire a software developer can now harness the power of no-code tools to create and manage software in a faster, cheaper, and simpler way.

However, no-code awareness is still low. A survey conducted at MIT Sloan School of Management, a large outlet for future entrepreneurs and product managers, showed that a staggering 76% of respondents are not familiar with “no-code.”

The purpose of this article is to raise awareness and adoption of these revolutionary technologies by quantifying key sector trends, mapping examples of powerful tools and their use cases, and identifying who can benefit from no-code (spoiler alert: it’s everyone!).

This article will cover 4 main topics + final “Key Takeaways” at the end, for those short on time:

No-code development is a fast-growing industry that is expected to reach ~$21 billion by 2022. In a survey conducted by Adalo, no-code experts (founders and CEOs) predict that by the end of 2022 no-code will be as common as making a Powerpoint is now. By 2025, these experts expect that no-code courses will be offered in a majority of schools and universities.

The investment world has noticed the huge value of no-code as well, as VC money continues to pour into no-code startups. My research shows that 110 no-code startups and companies have raised a total of ~$5 billion in venture capital in the last few years.

Some noteworthy examples include:

Moreover, large companies are strongly aware of the benefits of no-code and have begun to acquire some no-code startups:

🧰 No-code use cases and resources

Mapping the so-called “no-code industry” is not easy, both because it is ever-growing and because the boundaries are not always clear. Innovation in the space is very exciting, and there are impressive new tools appearing almost every week.

While researching the wide range of companies in the space, I’ve identified 10 key use cases of no-code, with some of my favorite tools listed below:

[👆 For a full and updated list of tools & resources in a (no-code) database format, use this link]

Naturally, as the use cases and tool diversity in this space increase, so do community forums, no-code marketplaces, and no-code education websites. These ancillary platforms are essential for navigating the ever-increasing array of tools, tutorials, and experts that can help individuals harness the power of no-code.

Some of the most relevant examples include:

One of the reasons why no-code is so powerful is that everyone can use it. I identify 5 main no-code user personas.

As an MIT business school student, I’m surrounded by a number of entrepreneurs. After coming up with a great idea and doing some high-level market and user research, many of them quickly jump to say things like “I need to hire a developer,” or “I’m thinking of finding a co-founder CTO.”

Now, while this may be necessary in some cases, it is definitely not the norm. Today more than ever, entrepreneurs need to be nimble and flexible. Increasingly, entrepreneurs are turning to no-code to move quickly during the early stages of their startup.

Entrepreneurs benefit greatly from no-code through:

The Future of Product Management Report states that “it’s becoming table stakes for project managers to build tech stacks around visual and accessible tools[low-code/no-code].” I attended the Product Conference last June and in it, Product School’s CEO & Founder Carlos González de Villaumbrosiaidentified 5 Top Project Management Trends, one of which was that “Tools are becoming No-Code.”

In multiple of my personal project management experiences (across companies of different sizes and industries), I’ve repeatedly experienced the same pattern: the scarcest resource is an engineers’ time. Therefore, successful project managers are those that learn how to leverage their team’s time in the most efficient way possible.

No-code tools empower product managers to handle tasks themselves without leaning on busy engineering teams, and by employing these tools are able to cut costs and delivery times to prove concepts and ideas more quickly. This article from helloMeets demonstrates how experienced Product Managers leverage no-code tools and release fully functional no-code apps.

Several no-code tools are targeted at enterprises (especially some specific use cases like internal tools, and analytics). Companies can greatly benefit from no-code tools to cut costs and move faster. Additionally, the increasing difficulty of hiring tech talent increases the need for enterprises to turn to no-code. Talent acquisition platform iCIMS showed that:

With this said, it makes sense that Gartner predicts that by 2025, 75% of large enterprises will use at least four low-code/no-code development tools.

Perhaps one of the biggest trends affecting the labor economy is the rise of the gig economy. According to Statista, the dollar volume of the gig economy is expected to grow at 15% annually over the next 3 years (almost doubling from 2020 to 2023!). The creator and freelancer economy is growing and the number of freelancers in the United States is projected to reach 100 million by 2027. No-code will be a huge enabler for this trend.

There are already a number of no-code developer/expert platforms that connect entrepreneurs, startups, companies, and agencies with no-code freelancers. Some examples include:

Some people believe that no-code will “replace” software development, however, the truth is quite the opposite. To begin with, there would be no no-code tools and platforms without coders. Moreover, since no-code allows non-technical business users to create relatively simple apps and perform tasks, software developers will have more bandwidth to work on harder, more complex developments.

Finally, developers can (and do!) use no-code tools to build something fast, get feedback, validate, and then move on to native development. A survey conducted by Formstack showed that 56% of those who write code use no-code tools (compared to only 10% for those that can’t code).

No-code is on a quest to empower everyone to create and build software without the use of code, “dispersing” what less than 1% of the working population could do previously into the hands of anyone with the ability to drag and drop.