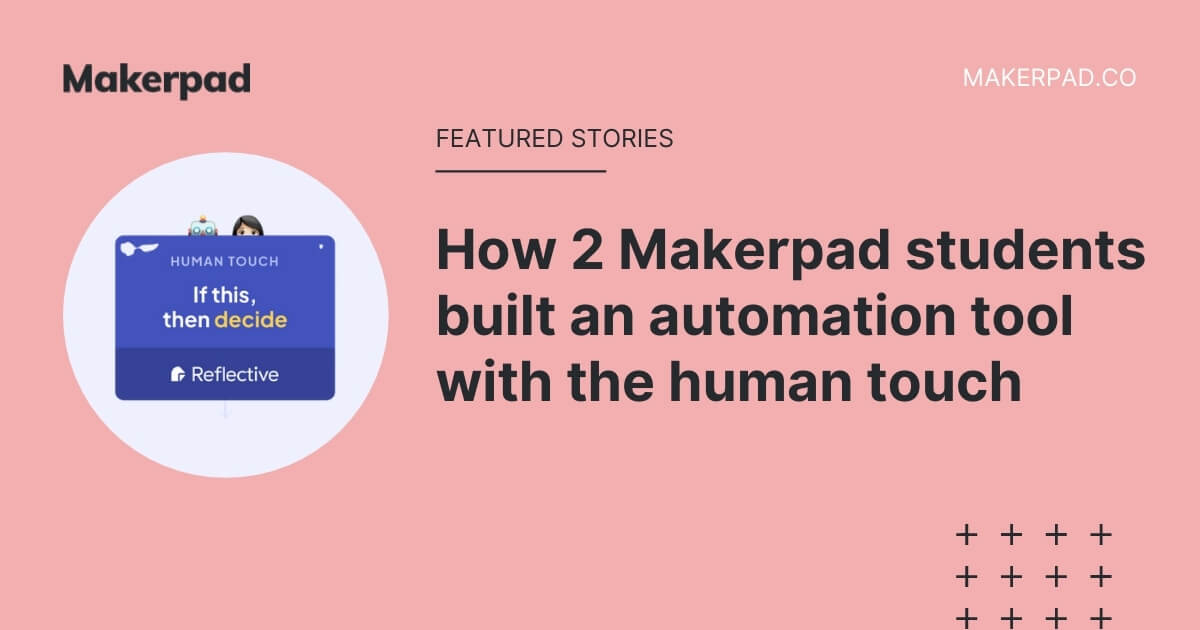 👉 Pejman Pour-Moezzi is the CEO of Reflective, a Seattle based company that lets business users build their own no-code human-in-the-loop automations

👉 Michele Drabiniok is a Germany based freelance designer

They just launched Reflective today on Product Hunt, so we caught up with both of them to find out what Reflective is really about and why they’ve worked together.

Hey Pejman, hey Michele! Tell us a little bit about Reflective, how your collaboration came to be and why Makerpad played a role in it.

P: Reflective is all about automation without losing the human touch. The no-code community loves automations, right — but too often there are things you’d like to tweak or change before the action happens. So when the automations save you time, that’s great, but there are a lot of edge cases that require what we call the “human touch”.

We wanted to build a tool for creating workflows that carry out most of the busywork for you and let you decide what should happen if things can’t be fully automated.

Without the Makerpad cohort we probably wouldn’t have been able to launch it with such confidence.

Michele, one of the cohort peers, is an incredible designer from Germany who we brought in about a month ago. He designed our landing page, helped us with parts of our interface and explored different ways to communicate our USP visually. But maybe Michele wants to tell the story about how Makerpad sparked our collaboration.

M: Thanks! After Pejman presented Reflective in his peer-led cohort session, I reached out to him. There was something I really liked about the interface they’d built.

He invited me to an onboarding call, and at the end he asked if I’d be interested in helping redesign their homepage. I was immediately down for the opportunity as I had just made the decision to go self-employed and work freelance after my contract would end in June.

As Pejman said during one of our calls, the universe has mysterious ways of connecting people and tying certain events together. In this case the universe was Makerpad, I guess. 😁

Awesome! Pejman, you’ve probably envisioned tons of situations in which Reflective can solve problems. Can you give us any examples of where the Human Touch comes in handy?

P: Actually, there are tons of different use cases that could benefit from such an approach.

Generally they are workflows that involve customers or external partners. We find in those cases there is often a lot of back-and-forth and complexity in coordination. Sometimes companies try to automate these workflows, but usually they fall back to email and spreadsheets.

Examples we currently serve are onboarding new customers where some sort of identity verification is involved. Also purchase orders for physical goods where you need to check inventory and generate price quotes.

But to give a detailed example that almost everyone can relate to: let’s say you have a form on your website where people can apply for a new job. Once they submit their application, you’d like to follow up with them with a pre-written email. But instead of just sending out the same email to everybody, you’d like to make it more personalized. In our submission overview you can see all the data the applicant has provided and you can tweak the pre-written email so it’s more personal.

And the beautiful thing about Reflective is that there aren’t really any limitations on what industry or use case it could be used for.

It sounds really powerful. So, we get what the Human Touch element is. How does Reflective work in action?

P: As I’ve mentioned before, everything starts with a form. You set it up with the Form Builder and that basically kicks off the entire workflow. You can add in simple text inputs, email fields, numbers, dropdown fields and many more. This way you are able to get all the data needed from the people who will fill out your form — be they a customer or maybe another team in your company.

The Submission Board is one of the key features of Reflective. It’s actually a kanban board with so-called ‘stages’ — columns that contain all the form submissions you’ve received through the request form. When setting up your submission board, you can decide how many stages you need and what automations — or ‘action items’ as we like to call them — should happen at each stage.

We offer two kinds of action items. First, there are external ones. These are automations that work with other tools such as Slack, Gmail, Google Sheets, Airtable and others. Then, there are our native action items like Approval, To-Dos, etc.

Once you drag one of the submissions to another stage, all the action items are triggered right away. You can configure each one to complete automatically or wait for your involvement or decision. That means you are in full control of what happens at each stage and at any given time.

Pejman, you ran one of our first peer-led sessions during the inaugural No-Code Fundamentals course cohort. How did this course become a key to your launch?

P: We got phenomenal feedback from all the incredibly supportive peers throughout the cohort. A few of them did onboarding calls with us and helped us find out where we needed to adjust certain parts of our interface and feature set.

It was the perfect place to ask for feedback as everyone is super-interested in new tools that make you more productive. It was also really helpful to be learning no-code from experts like Ben and Amie. I kept observing what was so hard with certain projects and I used those learnings to influence the design of our own product.

Automations has felt like a big leap in complexity versus the one-page websites. We were polled: 77% said they hit issues & many didn't end up submitting a project.

It's been interesting to think about why.

The best part was when Amie invited me to give a peer-led session about Reflective to my cohort mates. Everyone was so supportive and gave great feedback. Michele was there and that’s how we arrived at such an awesome homepage design today. I really couldn’t ask for a better experience.

🚀 The Reflective team just launched today on Product Hunt! Check it out and give an upvote to support our awesome Makerpad community.