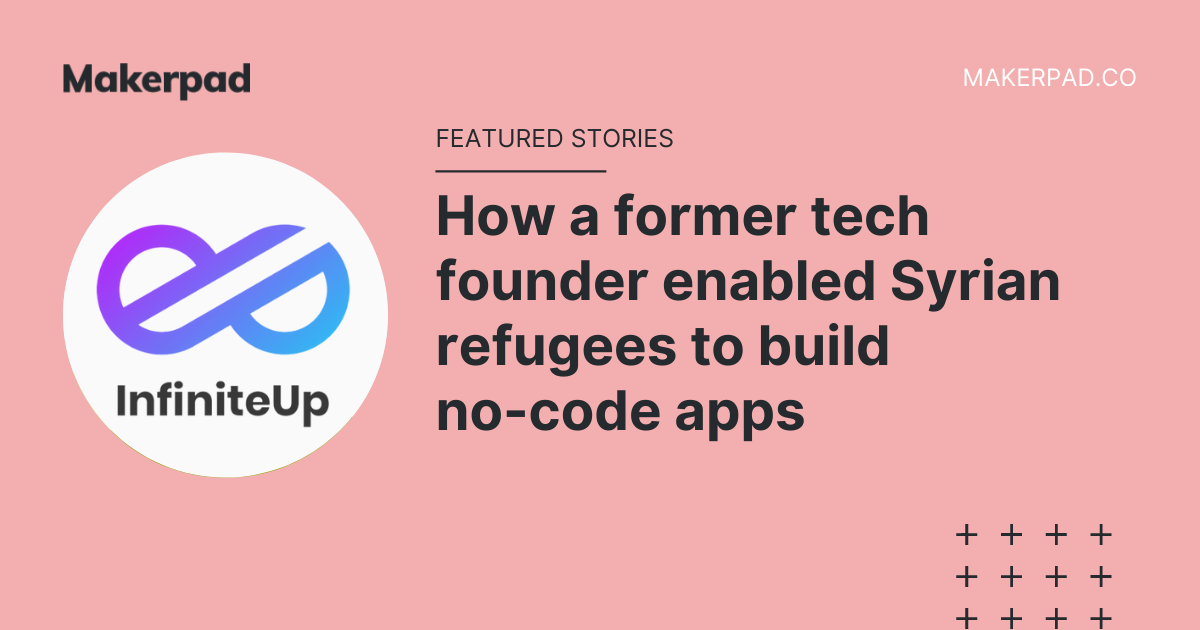 No-code has given non-technical founders a much easier path to building software to solve the problems around them. This is the story of Barrett Nash, the co-founder of a ride-sharing app called SafeMotos. After discovering no-code, he began teaching Adalo to Syrian refugees in Lebanon and set up an operation for rapid prototyping called InfiniteUp.

This is his story.

Hi, I’m Barrett Nash! I'm a Canadian triplet who has been living mostly out of Africa since 2007. I’ve always been a big believer in technology's ability to empower people and it seemed to me like Africa, with its exploding population, would be a logical place to focus my energy.

I was big into EdTech / ICT4D, working with MIT's One Laptop Per Child, my own EdTech startup, and CMU-Africa. I worked in that space for a while and definitely learned a ton, but I soon came to realize that education can be really slow and bureaucratic.

I was living in Rwanda at the time and noticed that they use motorcycle taxis to get around. They seem fun, but can be quite dangerous. Motorcycle accidents account for 80 percent of Rwanda’s road accidents, a statistic that only becomes scarier given this context: In Sub-Saharan Africa, traffic accidents are among the leading causes of death in the region.

My Kenyan friend and I had this idea for a safer Uber for African motorcycle taxis. The goal was to make transport safer and more accessible.

Literally out of the blue, we had the investor group called SOSV reach out to us, wanting to transform our pitch deck into a real company!

We called our company SafeMotos: A Safe Uber For African Motorcycle Taxis. We were based in Kigali, Rwanda in 2015 and expanded into Kinshasa, in the Democratic Republic of the Congo in 2019 (under the name CanGo). It was quite a ride!

We were the first mover in both markets, and managed to make every mistake imaginable in Rwanda.

Fortunately, we learned from those and did a much better rollout in Kinshasa. We went from launch to 5000+ trips per day in just 3 months! We were ranked by Fast Company magazine as Africa’s 7th most innovative company, and became a leader in the African startup ecosystem. We were covered by National Geographic, The Guardian, and got some pretty incredible recognition.

Then came more challenges—I was unable to raise sufficient money to keep it going and scale-up. It was a tough time for on-demand companies in Q3 / Q4 2019 with Uber's IPO fizzling out, and WeWork in flames.

With the writing on the wall, we decided to close shop while there was enough money in the bank to pay our employees severance—a rarity in Africa startup land. The entire experience was super fun, highly stressful, and also a little bit ludicrous: I would be challenged to follow a pure loss-making business model again; it makes for funny best practices.

Giving up on coding, and discovering no-code

After all this, I was for sure a bit disappointed, but then COVID struck and the whole world was upside down.

I still had (and continue to have) this deep faith in how technology can be a force for good in the world. I was convinced that even I, as an individual, could play a small but important role.

I had all these ideas of the tech I wanted to build, but I was not technical! Thankfully, my former co-founder and current best friend, who is one of Africa's best devs, shared Adalo with me. I still don't know how he heard of it; this was in March 2020.

I really fell in love with the platform immediately and decided to spend my time during quarantine learning Adalo instead of playing Zelda on Switch. I had never seriously considered I could make beautiful tech. I had tried Codecademy and online courses but just felt like my brain was not wired to the huge memorization needed to learn a coding language.

But here I was, myself, on Adalo building apps that I thought I'd need 500K in the bank to be able to recruit a tech team just to reach an MVP. I was still building apps for Africa, but I began having this Copernican moment where I realized that the amazing thing was not the products I was trying to build, but the mechanism of development itself: Adalo.

Inspired by the possibilities and opportunities to create amazing products without coding, I took to teaching! A friend invited me to teach Adalo to some Syrian refugee students in Lebanon that she was working with as a part of Global Education Movement and, to my great pleasure, the committed students learned amazingly well. Today, several of my students are better than me at Adalo.

I am now certain that no-code/low-code is crucial in me achieving my personal goal of helping technology unlock human potential at scale. With no-code, and platforms like Adalo, I really believe anyone can become a talented app builder.

The transition that we’re on the brink of is an extremely important one: anyone can create technology, instead of just consuming it.

I put a team together with my students in Lebanon and we've launched a small startup, InfiniteUp, which is building rapid MVPs to deploy in the African market.

It's been a passion of mine to see how far and wide Adalo’s reach can be. One day in September I had a brain wave: Adalo must want Adalo to spread too! I sent in a job application for Partnership Manager that day, and I got it! Now, it seems like it's my job to be a part of spreading Adalo. I am sure it will be hard—life is usually not easy—but I am excited because my work feels like it’s also part of my personal dream.

My advice to anyone building an app on Adalo

There is nothing I would love more than to see a new generation of technology builders spread across the entire world building products for the people around them. I've had the opportunity to do trainings with around 50 people on Adalo and for the people who became great at it, myself humbly included, here's what I've noticed, and would like to share with you:

1) It helps if you aren't trying to avoid a challenge, but instead focus your problem solving skills on product creation rather than learning software development language. This is useful because Adalo is as hard as you want it to be, it's like doing a puzzle, and you have to want to complete the puzzle to make any progress at learning Adalo.

2) Related to this, it seems like everyone I've met who becomes good at Adalo allows it to conquer their mind. Everyone I've met who has become great at Adalo has had this same kind of moment where they wake up at 4am and there was some impossible task during the day in Adalo they couldn't solve and then, in the middle of the night a potential solution comes to them, and they drag themselves out of bed to see how it works.

3) New users need to understand that Adalo is not just a new product but a new culture of creation. I have had so much fun playing with team dynamics on collaborative product creation, so for example having on a Zoom call or in person the Adalo Maker, the designer and the UX lead and they co-build the app together in real time. It feels almost like playing a co-op video game, and it's amazing how people can unblock each other.

4) Anyone who picks up Adalo who hasn't built their own app before should at least get to the point where they export their first app for Android or iOS, it's one of the most magical moments of my life. I never thought I would be able to create my own product and watching it run as an app on my phone was a Copernican moment where I realized: hey, it looks like I'm an app developer: isn't that the most surprising thing in the universe!

Thanks for sharing your story with us, Barrett! Feel free to send him an email at barrett@adalo.com.

Get an update every Sunday with new content, news and a behind-the-scenes of what our community is building.
Join over 16,000 others
You're in 😍- check your email to get started. Tweet me what you want to build to see how to do it without code.
Oops! Something went wrong while submitting the form.