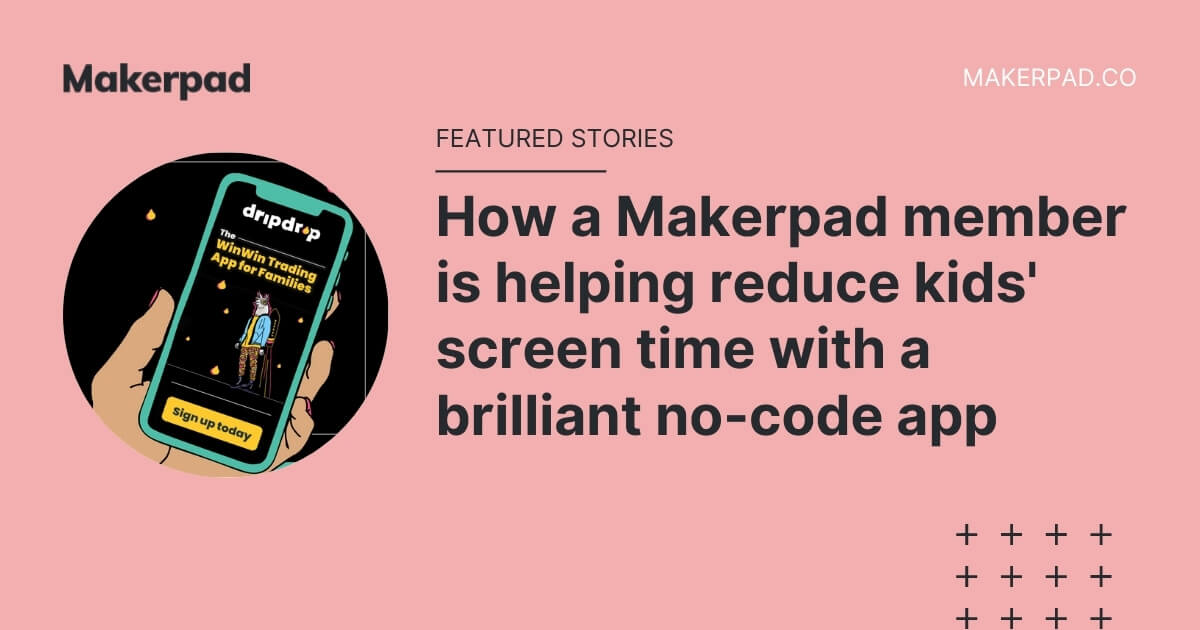 My name is Suzanne Michele Reeves. I'm the Chief Creative Officer at dripdrop, where I lead the creative and the product design, and use no-code every day.

I've been a Creative Director, an entrepreneur, a designer, an artist, and an illustrator. I have made a living off of using no-code tools exclusively for over six years now.

I was born in Palo Alto, California while my dad was at Stanford using very early computers that were so big they took up entire floors. I was the first kid I knew to have an Atari (saved up and bought it myself!) and we had a home computer before I was a teenager. He pushed me to get into computer programming from a young age and told me in the 70s that all our jobs would someday revolve around computers. He was right.

I have a degree in Fine Art and another in Psychology. After graduating I went on to create a career in design that has lasted for 20 years — so far! And I'm still a gamer, currently dividing my down time between Subnautica and Far Cry 3 Classic Edition.

I use all that knowledge, experience and sense of youthful play every day.

I started my own design studio — Art+Soul Design — using no-code tools back in 2015. Through that work, I eventually met Jason Brown, who had an idea for an app — dripdrop — that captured my imagination.

So I joined forces with him and a small team of highly skilled and driven people and poured all my energy into making this dream a reality.

In terms of Makerpad, I took the No-Code Fundamentals course because I loved the "tapas style" approach that Makerpad puts forth of all the different no-code tools on the market. I wanted to "taste" all the different products out there and identify what ones are best to use for what project.

In addition to continuing to enhance our Bubble app, I have dreams for a member-only community hub, a support forum, a creators’ portal and a biz-dev pipeline, that will all work harmoniously together.

I also love being a part of communities of like-minded people. And that is a vision that Ben and Amie are clearly committed to building.

I definitely wanted to join the first cohort and be a part of creating a really special community. A place where dreamers, designers, entrepreneurs and builders can come together to build cool stuff side-by-side together.

The origins of dripdrop

First, let me say that dripdrop is a team effort and it began long before the course. There are a host of amazing people who have had a hand in creating the app, its content, and its delivery.

Two people I will mention by name are Jason Brown, our visionary CEO, and Rob Roberts, our Bubble dev with wizard-level skills who handles the heavy lifting of building the app.

We have writers, instructors, designers, video editors, operations gurus, and an extended family of people who have been involved along the way to bring the dripdrop app to life.

I have been responsible for leading the creative — directing everything from the brand through to the current product design, plus hands-on wrangling of the front end development of the Bubble app.

OK, now on to the juicy stuff!

The dripdrop app was created to solve a major struggle for parents: the Screen Time Struggle. Kids always want more screen time and parents are always worried that their kids don't have enough balance between screen time and other healthy endeavors offline. The parents I interviewed expressed the same concerns — they worry that their kids might not gain the fundamental life skills they need to thrive in the real world.

The concept also has a nice origin story. Jason, one of the founders, felt like he was losing his 13yr old son to gaming and online virtual worlds. So they made a trade. One hour of gaming in exchange for one hour of meditation. Win-win. Shockingly, BOTH sides were happy with the deal. This led to the idea of creating an app to help families make the same type of win-win trades.

dripdrop: a trading app for families

So a kid can exchange doing a meditation session for an hour of gaming, or they can go beyond screen time and walk the family dog in exchange for some quality time with dad.

Kids can also choose to make a trade with their parents for dripcoin — our in-app currency. $1=100 dripcoin. They can spend their earned dripcoin on merch from our online shop or buy gift cards from their favorite brands.

The app offers a range of Life Lesson courses taught by people with a unique view into subjects that will help kids truly level-up their lives. Psychologists sharing how to deal with anxiety; Olympians on how to achieve good habits to achieve your goals; award-winning singer-songwriters showing how to write a song to express yourself.

dripdrop shares content that isn’t always taught in school. Like how to shift your energy with meditation, how to deal with bullies, how to create an impact in your communities. It additionally has Life Challenges that cover life skills activities such as household chores, hygiene, cooking, and more.

Our goal is to transform family life while letting kids level-up in the ‘real world’, not just in the online one.

In terms of building the app, we’ve actually gone through many different versions and software solutions.

We worked on a traditionally coded version, built a proof of concept in Webflow, and finally landed on Bubble as the winner to build the app.

We chose to work with Bubble because we could test out our assumptions much faster with a no-code solution than with traditional coding. Which isn't to say it doesn't take time to do it well(!), but it was still faster. And it was definitely cheaper.

Bubble is definitely a more advanced tool. It's a Harley, not a scooter: it has a lot of power, but you need to know what you're doing to operate it.

So, when you're willing to dive in deep and learn how to operate this high-powered tool, Bubble is a great solution for creating the app of your dreams.

With Bubble you can create just about anything you can dream up. Unlike several other no-code app-building tools, it can be completely custom.

While we started with a template initially to get a jumpstart, we eventually switched away from that and built from the ground up. We finally were able to realize our vision and have been able to create it to be exactly what we wanted it to be. Bubble gave us that ability at a price that made sense.

We’re really looking forward to the next upgrade release of the Bubble software that I've heard great things about. It sounds like they have listened to the feedback from the no-code community and are creating a product that will be even better to use.

No-code for the masses

As a team, we believe that no-code is the future of tech for the masses.

We've built our company around no-code tools: Webflow for marketing, Notion for an internal Wiki, Shopify for our ecommerce, Typeform for collecting feedback, Zapier to connect things together. And, most importantly, Bubble for building our app.

There are even no-code tools out there that can turn your Bubble web-app into an app that can be put into the Apple store.

Now, with Makerpad’s No-Code Fundamentals course, we will be able to keep building out our business with more exceptional tools — like Glide for early prototyping, Airtable as an external database... The list goes on and on.

Whether you're a designer, an entrepreneur, or a maker-builder, it's a great time to be in tech!