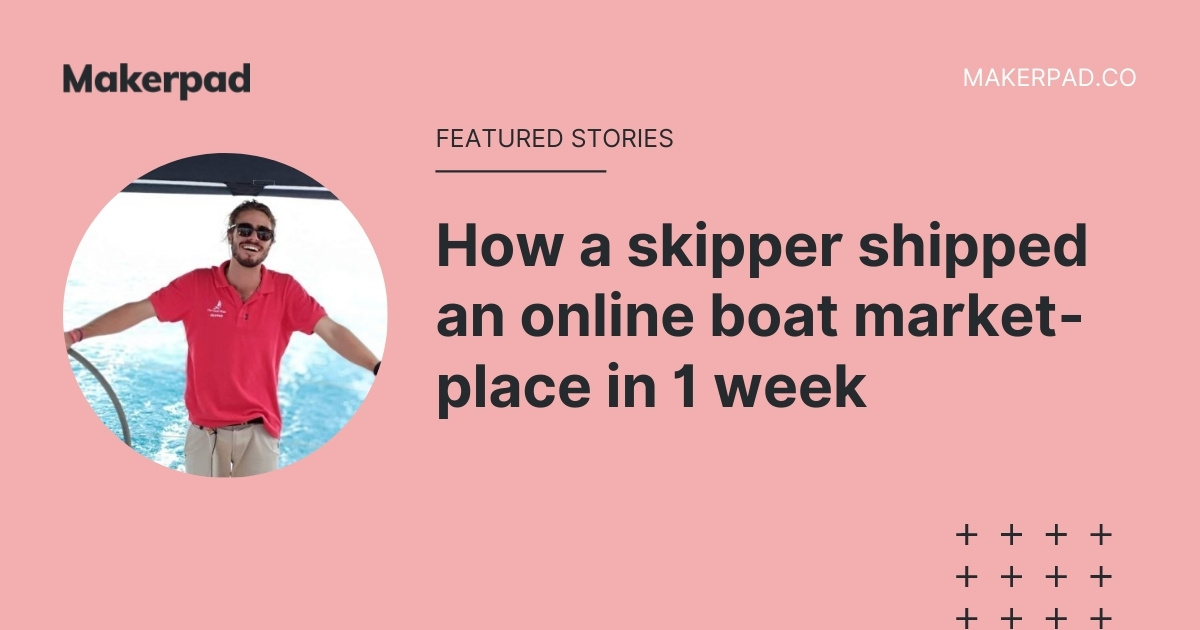 How a skipper shipped an online boat marketplace in 1 week

Marco Mendes hails from South Africa, and is a skipper by trade. Fun fact: when we interviewed him for this article, he was at the airport about to spend a month sailing the Greek islands (not that we’re jealous). Fun fact #2: he has spent almost as much of his life at sea as he has on land. 🤯

From skipping to shipping

Despite a seemingly dreamy career spent cruising the oceans, Marco felt it was time to switch things up and put his love for tinkering to good use. He figured that by making a living from the internet, he’d still be able to travel and do all the things he loves, but wouldn’t have to be at sea for months at a time, away from home and the people most important to him.

“When COVID hit I got stuck in the Caribbean. It was great in one sense but I was also thinking — oh my gosh, what's going on. I was able to leave by sailing a boat across the ocean and it was during that time that I was like — shit, I actually don't want to pursue this as a career for like the next 15 years.”

Marco’s first real work experience with no-code tools came when he was given an opportunity to build an ecommerce site for DTC brand Eden Feathers. He built it using both Webflow and the knowledge he’d gained from doing a handful of courses on UX and design. For his first project, we think you’ll agree that it’s awesome — take a look here.

“I found out about Webflow from a designer mate of mine. And I was just like, this is epic. This is super epic.”

Landing on an idea

With his appetite suitably whetted and his confidence soaring, Marco was ready for more.

It was through Webflow that he found Makerpad and, after following the community for a while, he made the leap and joined the second cohort of our No-Code Fundamentals course.

Marco did have an idea he was brewing before starting the course, but not too much clarity (yet) on how to actually build it.

The idea was for an online directory and marketplace for owners of boats (what else!). There was definitely a gap in the market — boats are typically listed and sold using third party brokers with little-to-no contact between sellers and buyers.

“There are two boat-selling Facebook groups I was following — one with 76,000 members and the other with 55,000. And there are boats going up there every day. I searched and searched for an online marketplace that services that market without using agents, and I realised there isn't one.”

Marco’s idea was to disrupt this market, offering a platform where sellers could freely list their boats and be contacted directly by interested buyers. And, unlike Facebook, their listings wouldn’t get pushed down and lost in the myriad of new daily posts, but would instead remain searchable and easy to find.

But how to build it?

Finding a springboard in no-code education

That’s where joining the cohort really helped. Marco went into it with an open mind in terms of what tool(s) to use and where to start.

Surprisingly, he didn’t start building his marketplace with Webflow. Although it seemed an obvious first choice since that’s what he was practiced in, he came across site builder Softr a couple of weeks into the cohort.

The No-Code Fundamentals course is structured in a way that allows students to get as broad an understanding as possible of the no-code tools landscape. Of course we cover some of the bigger players — the Webflows, the Zapiers, the Airtables, etc. — but we also make a point of covering the spectrum of tools available in each category.

“I had heard of Softr before but I didn't think I was going to build my site with it. But then it was like week two or week three of the course and Softr came up, and I just thought I’d spend the week playing around with it, to see what I could do. And by the end of the week it was done.”

What Marco ended up with was his fully functioning marketplace, boatsbyowners.co. He’s built all of it using only Softr and Airtable.

The front end of the site is created with Softr, an easy-to-use, drag-and-drop website builder. Then the database of information on boats, sellers, and interested buyers is all housed in Airtable.

Marco has some automations running through Airtable to help keep things ticking over, especially when he’s at sea with limited internet access.

“The automations basically notify me when certain things happen on the platform. So if someone registers their interest in a boat using the form provided by Softr, I get notified. Once I approve that enquiry, I flick a switch in Airtable and it pushes the enquiry to the seller.

A similar thing happens with people listing their boats. They fill in a form with all the boat details, I get an email, approve it, then the site is auto-populated with a new listing.”

Since graduating from the cohort he’s been working hard to get his site out there and find owners to list their boats. To date, he has 9 genuine listings and plans for many more.

Marco admits that his site is still very much an MVP right now — whilst Softr is powerful, it’s somewhat limiting for him in terms of features and functionality. For example, he wants to work on a way of sellers being able to edit their listing details themselves and the changes go live instantly.

But the huge upshot is that he’s been able to build a working site using just two tools. It’s costing him just $25/month right now (ideal when you’re living off savings) versus maybe $150+ if he was using a tech stack.

Beyond an MVP: Monetization and customization

So then, phase two — a stack using Webflow, Zapier, Airtable, and Memberstack — can come once he’s found a way to monetize the site. Speaking of which — what are his plans there?

First, he plans to make Boats By Owners a resource hub.

“I want to provide a lot of resources for people buying and selling boats, like templated contracts or other docs that people can fill out digitally. Also, when you sell a vessel you need a surveyor to assess it, so having a database of surveyors for vendors to choose from, wherever they are in the world, would be great.”

Beyond resources, Marco also has a unique idea that should make the decision to list on his site an easy one.

“I thought of trying to partner with an ad expert to offer visibility packages for people selling boats through the site. So if you’re selling a boat, you can pay extra for an ad package and we will advertise your listing across Facebook, Google and other platforms. Obviously this is great for the seller but it will also be good marketing for Boats By Owners, so it’s win-win.”

By making the site both a hub of useful resources and a more successful way of selling a boat than, say, Facebook groups, Marco hopes this will make it an attractive place to list a boat.

A call for collaboration

Marco’s actively looking for the right person to help him take Boats By Owners to the next level. Someone with experience in social advertising, paid acquisition and SEO, specifically.

“If anyone who is a marketing guru wants to collaborate, get in touch. I would love to partner with someone who can take hold of the marketing horns and run with it. I feel like there’s an opportunity for a great partnership here.”

Huge thanks to Marco for his contribution to this story. You can follow and get in touch with him on Twitter.

No-Code Fundamentals: Getting started with no-code

Build a business, launch a side-project, or finally start that idea you've been sitting on, without writing code.‍

Join a passionate and skilled group of makers, creators and entrepreneurs in this immersive, cohort-based course. Over 5 weeks, Makerpad's expert instructors, Ben Tossell and Amie Pollack, will give you the foundational skills you need to build and share your idea with the world.