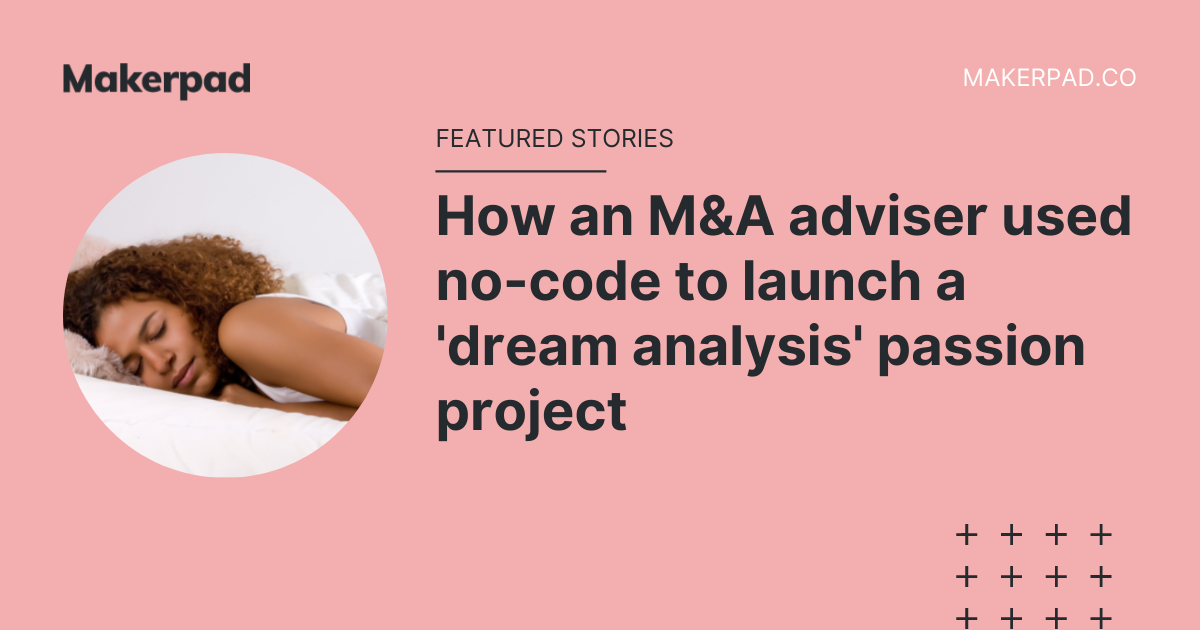 Our featured stories highlight the work of our maker community and their projects, businesses and accomplishments. It takes courage and hard work to bring your dream to life — which is why we were intrigued when we found out about James Duffen’s no-code business idea. He’s built a platform to help people dig deeper into the meaning of their dreams.

Hi! I’m James Duffen. I am a mergers and acquisitions adviser for tech start-ups. My focus is on automation and machine learning, particularly the structuring of unstructured data (which is basically about getting text, voice, image and video data into a form in which it can be used optimally).

In fact, I discovered Makerpad by tracking Zapier as part of my work!

I’m also a former entrepreneur and was part of the founding team of TRX.tv, a B2B online marketplace and licensing platform for TV program export rights. I joined as the first hire and took TRX from an idea to a revenue-generating and category-creating business.

We raised £14m ($19m) from angel, strategic, and institutional investors, and were nominated in the ‘Disruptors to Watch’ category in the Sunday Times Fast Track 100 (2018).

Throughout the lockdowns I had recurring dreams about escaping from various scenarios, heists, rooftops, even evading vampires that were chasing me! This isn’t surprising given the amount of time I’d spent at home, but it did make me think.

Clearly my subconscious was trying to tell me something, so for the first time, I thought I’d listen.

I started researching dream interpretation and there is a lot of stuff out there that simply didn’t work for me (fortune telling etc.) and most people seem to search for a specific symbol (e.g. an animal) rather than the whole dream and the patterns of dreams over time.

You really need to analyze a dream holistically and consider the wider context of a dreamer’s life versus using a dream dictionary, which says things like, “If you dream of a mirror maybe you should reflect more” and leave the dreamer to piece put all the pieces of the puzzle together themselves.

DreamMe is my passion project.

I studied psychology at university and was fascinated by psychoanalysis. Psychoanalysis is centered around the belief that everyone has unconscious thoughts, feelings, and desires. Freud, the originator of this theory, believed that dreams were a window into our unconscious.

I’m a vivid dreamer and  have been tracking my own dreams and have found it to be hugely insightful, which was the inspiration for DreamMe.

DreamMe is an app for personalized dream interpretation and dream tracking. The idea for DreamMe is to achieve what Headspace did for meditation, but for dream interpretation. My goal is to move it away from mysticism and New Age philosophy, and towards wellbeing and performance enhancement.

My plan is to build an app to interpret and track dream meanings and themes. It will guide users to the right frame of mind before sleep (e.g. meditations) and then prompt them upon waking to record their dreams (using speech to text conversion) which matches keywords that are then automatically interpreted (using trained machine learning models) and themes logged. Over time, users can see what their subconscious is trying to tell them.

I had this idea in early August and decided to validate it in stages. Stage one was to see if anyone would be interested in finding out more about personalized dream interpretations via an app. I set up a basic landing page in Carrd and ConvertKit, and paid Google ads. In just over 2 weeks I had over 100 email sign ups!

I moved on to the next stage.

Stage 2 was to see whether people would join a members site and submit dreams for interpretation. I built a member site in Softr, Airtable, ConvertKit and Zapier, where users could login in, submit a dream and then read their interpretation.

Again using Google ads, I grew the signs ups to 250 in a couple of weeks, and 75 members submitted dreams for interpretation (they were offered as free and I paid for an experienced dream interpreter to analyze them).

This week, I moved onto the next stage!

Stage 3 is to see whether people will pay for personalized dream interpretations. I’ve been working with experienced therapists to make this service as useful as possible, who are helping inform the development of the platform. I’m currently adding a payment function and working on SEO & CRM (a recent email about the meaning on cats in a dream got a 70% open rate!). Stage 4 is to build the app and train the machine learning models, which I’m prototyping, watch this space!

Building a membership site for the first time

For me, this was all trial and error really, but I love building things so I’ve enjoyed the process. I’d never built a membership site before, so it was quite a learning experience. Softr has been wonderful to use, it’s easy and their customer support is really helpful. Google Ads is not as straightforward, but I’m getting up to speed rapidly.

My advice to makers that are currently building something, or thinking about it – just go ahead and start, don’t overthink it!

The first landing page looked terrible and many of my friends hated it but it still worked! I would however recommend that you map out a couple of steps in advance so you have an idea of where you want to go, but also be open to user feedback and course-correct if needed.

Finally, join Makerpad’s No-Code Fundamentals cohort! I was part of the very first cohort, and that community is still active and engaged now, even though it’s been months! Both Ben and Amie were super patient with me and I really appreciate that. If you want to build something but have no idea where to start then sign up.

Thanks for sharing your journey with us, James! Keep tabs on your dreams and what’s happening with DreamMe here.

No-Code Fundamentals: Getting started with no-code

Build a business, launch a side-project, or finally start that idea you've been sitting on, without writing code.‍

Join a passionate and skilled group of makers, creators and entrepreneurs in this immersive, cohort-based course. Over 5 weeks, Makerpad's expert instructors, Ben Tossell and Amie Pollack, will give you the foundational skills you need to build and share your idea with the world.