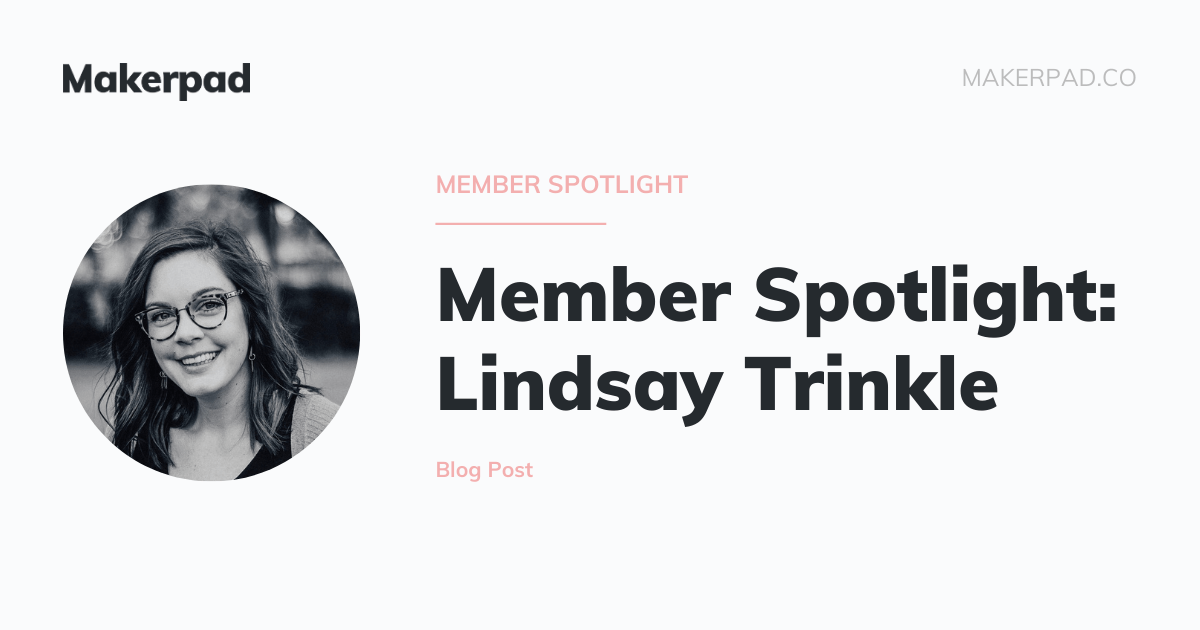 We are fortunate to have a vibrant community of hundreds of members from all different places across the globe. We come together to talk about tools, tech, no-code and new ways to make creating and building even more productive than before.

At Makerpad we love sharing our members' journeys through learning no-code, using new skills in their workplaces, building projects and even launching businesses.

Each week we’ll be highlighting a member from our community and sharing their story, background and previous projects through our Member Spotlight blog post series.

This week we are chatting to Lindsay Trinkle from Atlanta, Georgia.

Lindsay is the Cofounder of @MakeswiftHQ.

Hey Lindsay, great to have you be part of the Member Spotlight. Can you give us some background on how you got into no-code? How long have you been using no-code tools and what got you first interested?

I started tinkering with WordPress themes over 10 years ago, before it really qualified as "no-code." At that time I was heading up marketing for a coffee roastery. I ran point on building out the company's first e-commerce site and managed our custom WordPress site, which mostly meant constant emails to developers to make even the smallest copy or layout changes I needed.

After that job I got into the tech startup scene in Atlanta, running programs and operations at Atlanta Tech Village (the nation's fourth largest tech hub) and Atlanta Ventures. As a part of that job, I worked directly with a lot of startups and helped a lot of them with their digital marketing strategies.

The term "low code" was coined during this time and I ate it up. Landing page builders were really starting to come into vogue and I tried pretty much every single one. By 2015 I was working for myself full time using no-code website and landing page builders to create marketing campaigns for my clients. I relied a lot on no-code tools as my freelancing turned into a small agency.

I remember trying Notion after its initial launch and feeling like they were on to something big and had a similar feeling the first time I tried Webflow.
‍

WordPress seems like a common entry point into no-code for so many people! It definitely gives people the confidence and skills to try out new no-code tools. So can you take us through some of the no-code projects you have built in the past and what tools you used for them?

The biggest game changer for me was when I tried Landing Lion, a local Atlanta startup with a new no-code landing page builder. Their UX gave me creative freedom that I had yet to experience in a no-code tool, and with a very minimal learning curve. In 2016 I became their first paying customer.

Fast forward to 2018, my business partner and I split ways and I was trying to figure out what was next when I met up with Alan, the CEO of Landing Lion. He convinced me to join their team. Since then I've been more immersed in no-code than ever.

Not long after I started with Landing Lion, we decided to pivot and build a full website builder called Makeswift. We made some big changes, including selling Landing Lion and restructuring the team, and I became a co-founder at Makeswift.
‍

‍
As we've built out this product I've spent countless hours talking to customers whose journeys into no-code are similar to mine. I've also continued to rely heavily on no-code tools to run operations at Makeswift—Notion and Airtable especially. It's exciting to be a part of building the future of this space that has enabled me to accomplish so much in my career thus far.

Most of my projects have been websites and landing pages for myself and clients. I mostly used Landing Lion and Webflow, along with WP themes like Divi from time to time.

Finding a tool that you enjoy using so much often means that it often gets used across many projects! So let's bring things up to the current day, what are you currently working on and what stage is it at?

Now I build everything in Makeswift – our current marketing site is built in our product for example. We also use Notion for all of our project management and most of our CRM needs. I will sometimes use Airtable when I need a bit more functionality than Notion's databases currently give me.

We have over 300 early access users in Makeswift right now. We also have a few hundred users that were previous Landing Lion customers and migrated their pages over to Makeswift before the product was sunsetted.
‍

It’s a great idea to build your own landing page in your own product. Really becoming your own customer! Thinking more of the future, what are you looking forward to seeing happen in the no-code space in the years to come?

I'm excited for the no-code space to bring more people into the creative work of building tech. The power of no-code is its ability to lower barriers to entry for creatives who are driven but don't have the time or resources to become deep specialists.

I am hopeful that this influx of new builders will change tech entrepreneurship as we know it by making it more accessible to people who were previously sidelined.
‍

Definitely! We’ll start to see new and creative projects coming from a wider & more diverse community! Do you have a favourite no-code tool? And what's the next no-code tool you're thinking of trying out?

Makeswift of course, but that's cheating. 🙂  Notion really wins the day for me. They have come so far in the past couple of years and are adding new features at an incredible pace right now. It's such an elegant and powerful tool. I use it for work and personal projects and don't know what I'd do without it!

As far as the next tool I want to try, I've been meaning to try to build a personal project on Bubble for a while. In my current season of life – working from home in a pandemic with a 2 year old, I have less margin for side projects than I used to but nonetheless, my goal is to build a simple web app before the summer of 2021 using no-code.

Thanks so much for sharing your story with us Lindsay. We look forward to hearing more about your journey soon!