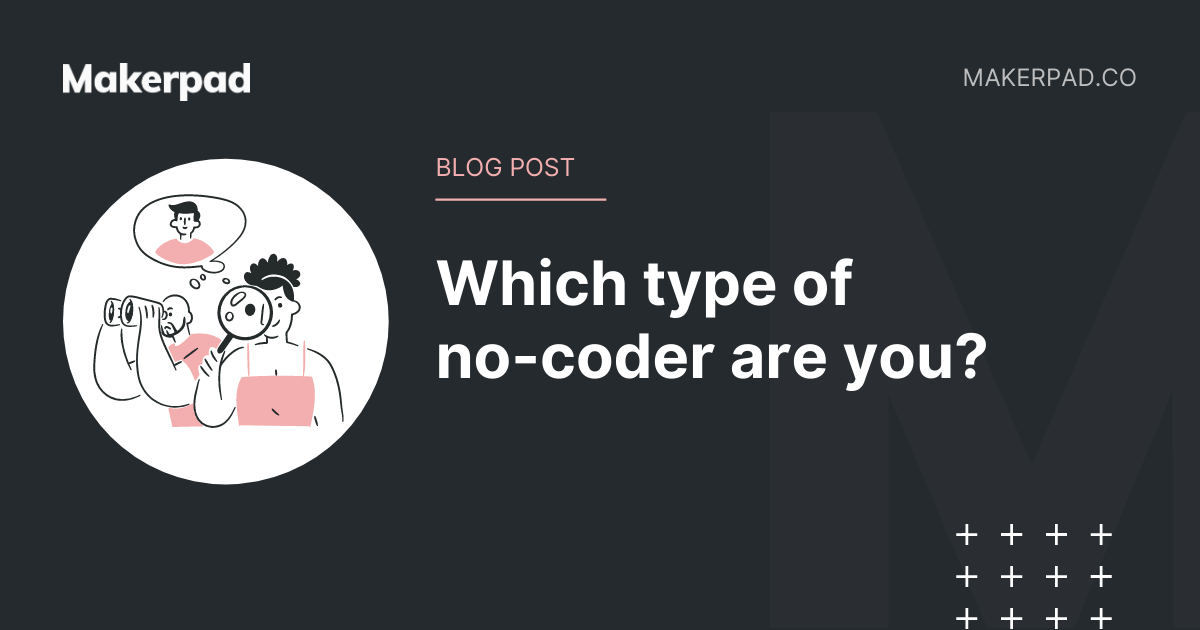 Which type of no-coder are you?

As the no-code community grows we start to see a wider variety of people interested in learning about building without code. Interestingly, while we are all one big community there are some big differences between our motivations to learn, our interests and our goals.

We’ll take a fun look at some of the most common kinds of no-coders and what they are working towards. By looking at which type you identify with most it can help you to recognise your strengths and how you can contribute to other community members' successes. Also how you can better balance your skills to help you get to your goal faster. We also recommend some Makerpad lessons that will help you on your way too!

Which type of no-coder are you?...

The Big Idea is focused on their one goal and they are going straight for it! To them, no-code is a tool they use in their job. They are hard-working, focused and consistent in their aims. They have a specific product to build and a deadline to meet and their belief in what they are working on is unshakable. A dedicated person with a plan, a single aim and an unstoppable drive to get there.

They usually come from a corporate background, in an industry that’s likely not yet heard of no-code. They are fighting against slow established systems but they’re willing to embrace whatever tools are needed to get the job done, that includes no-code, low code and even code if needed!

They are most definitely aiming for big things with their eyes on a big payoff, profit or investment. They don’t consider anything less than a moon-shot to be worth it and they have a solid chance of getting there. They are excellent at networking, zapping problems and coordinating elaborate solutions on a daily basis.

However for The Big Idea, sometimes their goal can be all consuming and they can lack that all important work / life balance. Their identity is very much tied to their work. Adding more creativity and fun to their learning would help them to envisage new approaches. They are disappointed when their results are anything less than exceptional. Becoming a little bit more of a maker would help them to better connect with their teams, understand problems as a hands-on creator and not just a visionary.

They are most interested in learning about powerful no-code tools like Bubble and 8base but would also benefit from learning more about fun and creative tools like Carrd and Glide.

The Learner is an interesting character, focused more on the tools themselves rather than a project or a problem. They love learning all there is to know about every feature of a product. They compare and contrast them, get deep in the research and they love it! They thrive on talking about no-code and watching live streams and asking questions.

They are spectacular community members and are always forthcoming with really valuable feedback. They are supportive and helpful and generous with their time. They buy books and courses for enjoyment and no-code is both a pursuit of learning and a fun hobby too.

They are more of a consumer than a creator but have a breadth of knowledge and a top down view of lots of industries, so they often understand the bigger picture. The Learner likes to know the entire path they are travelling before setting off on a no-code adventure. They are great planners, organisers and love data.

However they often get stuck when it comes to building successful projects of their own. They struggle to find a problem to solve. They worry about which is the best tool to use and can easily be overcome by paralysis by analysis. Their analytical nature overwhelms their decision making abilities. They would love to own a successful no-code company and they would be very good at it. They just need to put some determination towards solving specific problems for paying customers and not just building their knowledge.

They are most interested in organizational tools like Airtable and Notion but would benefit from learning about finding problems to solve and building and validating products.

The Maker has a busy life, juggling their day job, friends, family and still squeezing time in for their side projects between 9pm and midnight. They buy domains as a hobby and most definitely are working towards shipping 12 projects in 12 months.

They have tons of ideas and always spot cool niche ideas and come up with fun, creative solutions. They are extremely efficient and their productivity is off the charts. The Maker is able to jump on a trend at the right time and capitalize on the wave of interest and they are certainly an early adopter of new tech.

They have talent and skills in so many areas and can ship a v1 MVP in a matter of hours because they move fast and ship often! They have honed their shipping ability to return better and better results every time.

However while they are great at starting things, they are not so great at finishing! They’d love to one day earn a living if one of their ideas took off but they go back to the drawing board so often, they are always starting from scratch.

Instead of doubling down on something that shows signs of working, they’ve often moved on to the next thing. They have lots of V1’s but not much gets past the MVP stage. With a little time spent polishing up their best work they could go from good to great quite quickly!

They regularly fight distractions and are drawn to immediate feedback. They get frustrated with slow progress and this causes them to lose interest quickly. They should spend a little extra time on their single best idea. They still will get to solve problems quickly but their concentration will start to compound and grow to be their biggest effort yet.

They are likely most interested in building both a job board and a membership community in just one weekend but they would most benefit from joining our rolling Build Club challenge, where they can focus on consistently contributing improvements to see their efforts snowball into something great.
‍

The Improver has been in the game for years. They built a small but successful project a while back yet they’re still quite content with where it’s currently at. They’re naturally slow and steady builders who chip away at a long term passion project over time. They don’t have any plans to hire a team and they love being hands-on and in control. They only ever learn exactly what they need to, right at the exact time they need to implement it.

They adore making things better and optimising processes for a calmer, stress free life. Their greatest strength is their ability to be consistent and make measured progress. Slowly dripping effort into a project to make an impressive

While they might have other hobbies they always return to their central project and are deliberate in their focus. The Improver isn’t swayed by trends and instead is happy working on their backlog of tweaks. They’re fired up by even just a 1% incremental improvement and are superb at celebrating the small wins.

While what they have built is impressive, they often leave a lot on the table. They don’t ship quickly so they know that sometimes opportunities pass them by.

They are interested in building awesome time saving automations with Zapier and Parabola but could also benefit from learning more about finding your first 100 customers and creating content quickly for growth.

The Lifestyler is a bit of a hybrid. They started out as a maker but then their idea took off and since then they ran with it! They are a die hard no-code founder and are in it for the long game.

They talk about no-code on a daily basis and they have a strong network who they are also great friends with too! They push their company to be the best it can be, even when it’s difficult. They have hired a team but are still learning as they go.

They always have a calendar packed with zoom calls, podcasts and investor meetings. The Lifestyler is great at seeming to be everywhere at once and you can always count on them for a quick reply.

They make decisions at lightning speed and bring out the best in the people they work with. The Lifestyler is nimble and adaptable and likes being ahead of the curve. They can even be found writing tweet threads on their holidays!

However as their venture has grown their role has changed. They’ve got a jam packed schedule but less time to be creative and bring out the maker that they used to be.

They are most interested in learning about the future of no-code in 2021 but they would also benefit from learning more about building calm companies.

We hope you enjoyed our journey through the characters of the no-code community. Did you recognise any of those traits in you? Perhaps there’s a little bit of each of them in all of us!