Building an automated Twitter bot to create an archive of information 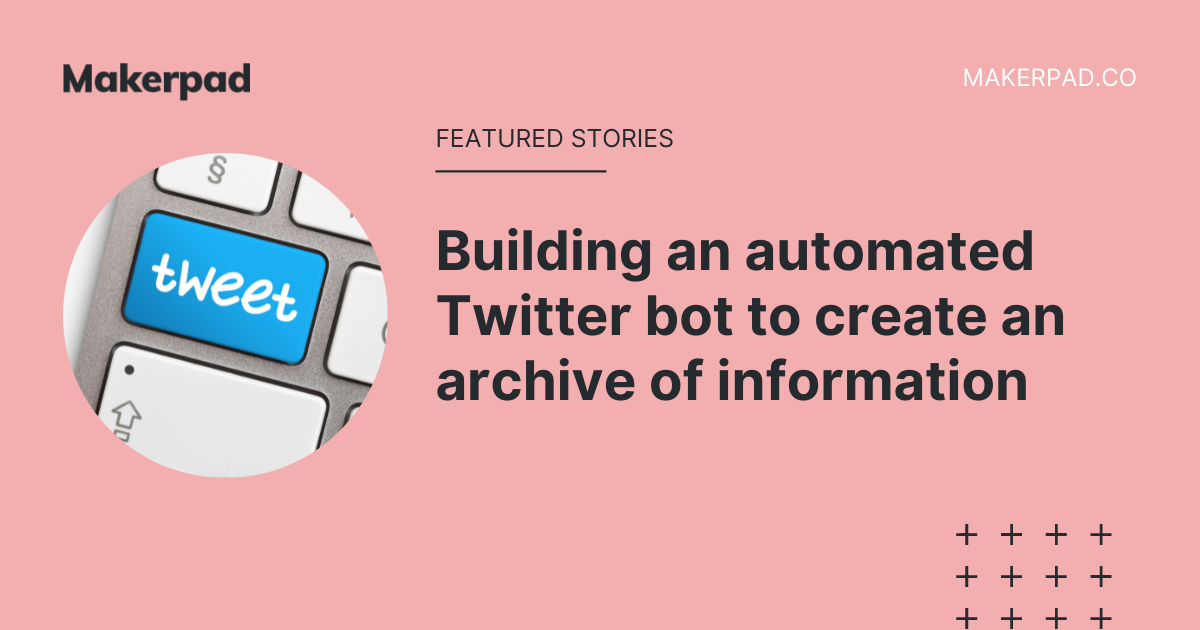 Here’s a no-code project that we love, built by Tamilore Lawal! In this story, she shares her journey with no-code, and her experience using Softr, Zapier, and Airtable to turn Twitter into a library of helpful information.

I’m a Product Manager, entrepreneur, and no-coder. I’ve been exploring the big, bad world of no-code for about 4 years now. When I’m not working, I like to doodle ideas, watch cartoons or true crime documentaries and check for random stuff on the internet.

If I could have one superpower, it would be to control time.

I never really started out wanting to build products as a career or use no-code tools. As a matter of fact I would say my ambitions at the time were totally different! I wanted to be a Criminal Defense Attorney, but a couple years into the University, I just fell out of love with that and more into something else.

My earliest memory of using no-code tools was in my 3rd year at University back in 2018. At first, I would use it as a way to make some of my tasks easier but it became a full on thing when I realized I could use it to build my own DoorDash. (DoorDash is an on-demand food delivery service that lets you order food and drinks from local restaurants in your area. When you order from DoorDash, your food is delivered by an independent delivery partner).

I studied at the University of Lagos, and for me one of the most tiring things was trying to get lunch at the restaurants. I asked a couple of friends if they felt the same way and, no surprise, they did!

I decided to use this marketplace tool called Yelo to build something similar to DoorDash. The idea never kicked off but I recall having a lot of fun building it. After that experience, I became more intrigued with no-code and that’s where my no-code journey began.

Today, I’d like to share my latest project with you called ‘My Bookmark Bot’. One of the things I like to do on Twitter is curate tweets that I think are cool. It could be something funny, or helpful, a job opportunity, or an idea I find interesting.

I’m able to do that thanks to Twitter’s bookmark feature, but I probably have thousands of tweets bookmarked! When I remember something I want to refer to, I find myself scrolling endlessly through my bookmarks and most of the time I don’t find what I was looking for.

I decided to create a tool to help with all that. My Bookmark Bot is a tool that helps me export my already bookmarked or newly bookmarked tweets. I can organize them in categories, and search by words I remember in the tweet or the username on the tweet.

To use My Bookmark Bot, I simply reply to the tweet I want bookmarked by tagging @mybookmarkbot_ and stating the category I want that tweet in. The bot then exports that tweet to a simple webpage interface where I can filter by categories, search and link back to Twitter.

I’m also able to use it on both the Twitter mobile app and web app so no need for extensions.

Using Softr, Airtable, and Zapier to build My Bookmark Bot

To build this, I relied heavily on automations. Everything happening at the backend is controlled by about 15 Zapier steps. I needed API keys from Twitter for some steps to run properly, but I got a bit confused at some point with all of Twitter’s documentation.

I decided to use Nocodeapi as an easier solution. It worked!

Then, I needed a database to store all the tweets that would get exported and categorized. For me, there’s no better option for that than Airtable. I like Airtable because it’s super easy and fun to use, and I was able to structure the database in a really simple but effective way.

Using Airtable made Softr an obvious choice for the front-end part of the tool. It already had a list component made specifically for showcasing tweets and that just went perfectly with what I had in mind.

My advice to no-coders and makers would be to start out learning what they are comfortable with and then gradually expand their stack of tools. I also think it's super important to not just watch videos or read stuff but to actually learn by building. Build lots of dumb apps if you can, build something for your personal use and ultimately build products that other people would love to use.

Thanks for sharing your story with us, Tamilore! You can check out her other projects here.