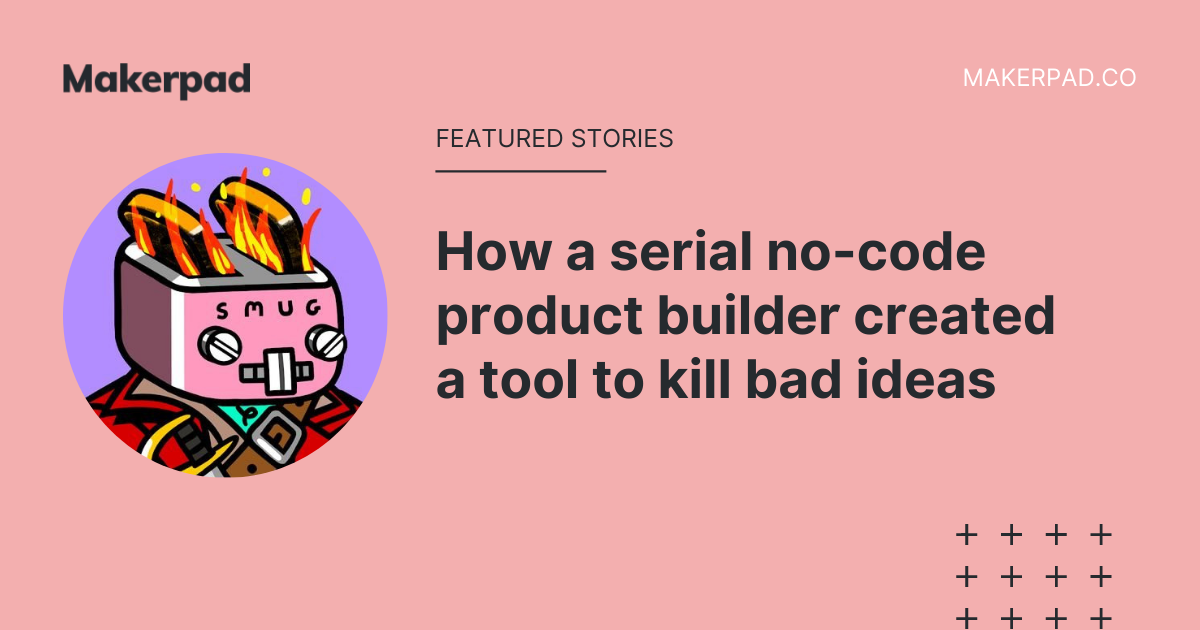 We’re super excited to share the journey of @nocodelife and his experience with building no-code tools on Bubble. He answers the important question of what to do once you’ve gone through the effort to build a no-code tool, and how you can think through your ideas more strategically using Yep.so

I primarily go by my Twitter handle @nocodelife because my job involves working with the government and I’m trying, albeit unsuccessfully, to keep my side projects separate! I’m the non-technical co-founder of a tech startup, which I’ve been doing since 2015. Prior to that I worked in finance and more recently microfinance (similar to finance, but less evil).

Outside of work and no-code I’m part of a small family with two wonderful young daughters, which leaves me with roughly five minutes per day to myself.

Like many people, reading The Four-Hour Workweek inspired me to try and start a side hustle, which led to over a decade of trying to learn to code and eventually the aha moment of discovering no-code!

Dappling in no-code on Bubble

I discovered no-code in October 2019 and was instantly hooked, in particular to Bubble. Obviously with a decade of pent up ideas I went too far and built EVERYTHING I could think of for an audience of crickets, then moved on to the next idea without any attempts at marketing.

This “experimentation” phase lasted for over a year, during which I launched multiple SaaS products, a newsletter, a podcast, multiple directory sites, information products, and a paid community. It was a fantastic learning experience! I’d recommend it to anyone who’s struggling to find direction, but it can be disheartening to look back at the graveyard of products lying in my wake, not to mention my recurring subscription bills from all the tools I’ve used and forgotten to cancel.

Narrowing down a project

In 2021 I decided I needed to focus more, and I did, for at least a couple of months! A co-founder and I built a micro-SaaS product for community managers called Community Copilot, made with Bubble for the front-end and code on the back-end. We were excited about its potential to grow with the booming online communities space.

This is the part where I’d LOVE to tell you it’s now doing $10k MRR, but sadly the truth is I moved too slowly. Once again, I failed to promote it and sure enough our attention was drawn elsewhere. It’s still going, but with only a couple of paying customers.

For 2022, I’m determined to finally learn marketing and use it to build a micro-SaaS up to a decent amount of revenue. I’ve arbitrarily set myself a $5k MRR goal. I still haven’t decided what the product will be, but over the past couple of weeks I built and accidentally launched a simple landing page builder called https://yep.so which is getting positive feedback.

The idea stemmed from a problem I’d experienced: Even with the simplicity of landing page builders like Carrd or sites like Gumroad, getting an idea out of your head and onto the internet is still a painful process. The two parts I really struggle with are:

My solution is a super simple landing page builder which guides you through what to write and removes a lot of the design decisions. In fact my original vision was that I want to be able to ship a landing page without leaving the bathroom!

Another feature I wanted was easy-to-understand analytics. I’ve never understood the Google Analytics dashboard and as a result always forget to add it to my Carrd sites, so I’m left flying blind most of the time.

Additionally, after using Yep.so a couple of times myself to create landing pages for random ideas I had over Christmas, I noticed a couple of interesting things which made me more excited about it.

The first happened when I tweeted about one of the ideas and the tweet got barely any engagement, but to my surprise the landing page got 50 views and 10 email signups. This made me realize that likes and retweets are not the whole picture, and perhaps we’re missing valuable social cues by expecting a 280-character tweet to adequately communicate a vision.

The second thing I’ve found is that it’s fascinating to compare the data from two ideas side-by-side and see which had the most views and which converted better. As someone who’s always trying to choose between ten ideas, this is data I can’t easily get on any other platform, but on Yep.so it’s right there in front of me.

I built the entire site on Bubble with a few plugins to help out. It only took me a few days, partly because the new responsive engine makes design easier, but also because the project itself was relatively simple compared to other apps I’ve built. I had the idea of making the page where you create and edit the landing page look exactly like the landing page itself, a real WYSIWYG editor, and it works surprisingly smoothly.

To be honest it might have removed the only barrier stopping me from flooding the internet with random ideas!

My experience with working on Bubble

Having used Bubble for so many other projects, there weren’t any major challenges, but there were some enjoyable minor quibbles I needed to overcome.

One of them was working out how to have dynamic social media preview images for each user-generated page. It’s really important that when someone shares the link to their page on social media, the preview text and image are related to the idea rather than being generic to the whole site. This is something I’ve never done before so some research was required.

In the end I found a fun and hacky way of doing it!

When the user previews their page for the first time, the site first redirects them to another page which is the shape and size of the image I want to create. The text on the page is dynamic so it’s specific to their project, and it adds a random gradient background. Then a plugin creates an image from the page and saves it to the database.

While this is all going on (it takes a second or so) there’s a popup which covers the whole screen telling the user “your page is being created” so they don’t see the hackiness going on in the background.

My advice to makers

My problem with advice is it’s difficult to take it on board until you’ve experienced it yourself. I’ve known about the importance of validating my ideas before building and actually doing marketing for a decade, but I chose to ignore them until I’d experienced the pain myself. Not once, but at least ten times over!

If you’re a better advice-taker than me, then my advice would be to read Zero to Sold by Arvid Kahl and listen to the IndieHackers podcast. Use that knowledge to avoid all the basic mistakes. But if you’re pigheaded like me, the best advice is just to start shipping things and learn these lessons for yourself.

One last thing: if, like me, you struggle with marketing, I’m starting a newsletter on “marketing for people who don’t like marketing” where I’ll be learning how to do it in public. You can sign up here.

Join 19,000+ subscribersSubscribe to The Makerpad Newsletter. Get the best of Makerpad's no-code education and real maker stories every Sunday, for free.
‍
As a welcome gift, you'll get a copy of The No-Code Playbook and A Quick Guide to Launching a Business.

Join 19,000+ subscribersSubscribe to The Makerpad Newsletter. Get the best of Makerpad's no-code education and real maker stories every Sunday, for free.
‍
As a welcome gift, you'll get a copy of The No-Code Playbook and A Quick Guide to Launching a Business.