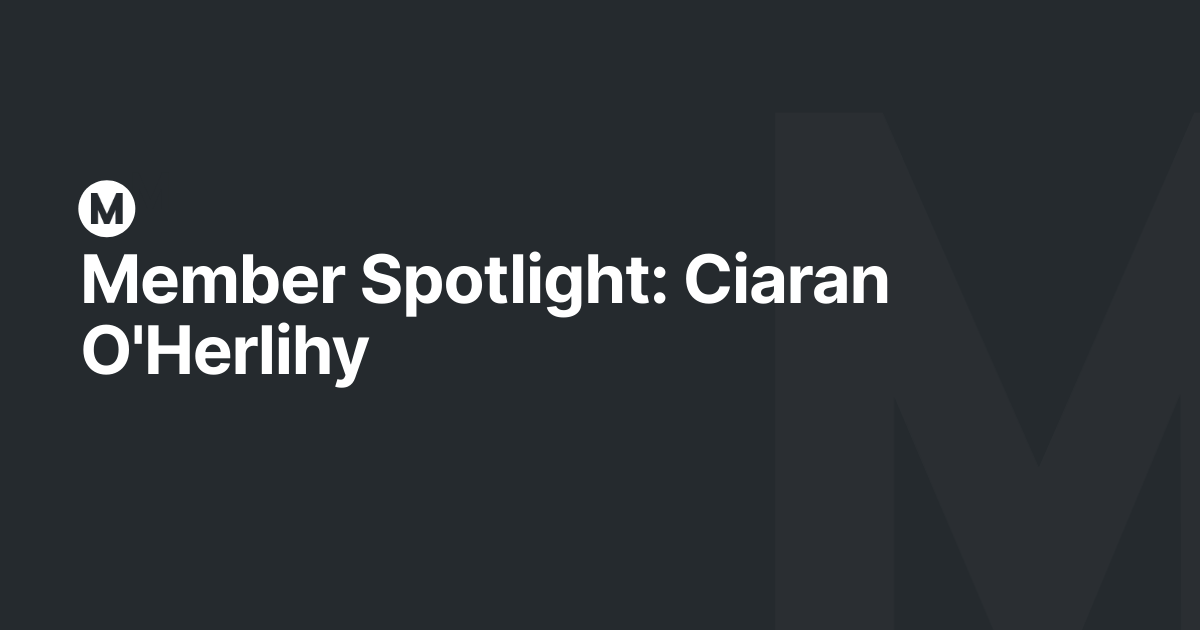 We are fortunate to have a vibrant community of hundreds of members from all different places across the globe. We come together to talk about tools, tech, no-code and new ways to make creating & building even more productive than before.

At Makerpad we love sharing our member’s journey through learning no-code, using new skills in their workplaces, building projects and even launching businesses.

Each week we highlight a member from our community and share their story, background and previous projects through our Member Spotlight blog post series.

This week we are chatting to Ciaran O'Herlihy from Cork, Ireland.

Ciaran works in Product Partnerships at Google. He is also the Founder at Adepty and LazerBird.

Hey Ciaran, great to have you be part of the Member's Spotlight. Can you give us some background on how you got into no-code? How long have you been using no-code tools and what got you first interested?

I’m from Cork, Ireland but currently based in Athens, Greece. Leading up to my sabbatical and paternity leave in November 2019 I stumbled across Makerpad and so began my love affair with no-code. I had intended to learn to do basic coding in my time off but actually no-code / low code made more sense to me as what I really wanted to do was knock out ideas quickly and cheaply.

So I paid for a lifetime Makerpad membership and quickly started investing in myself! Over the next few months I started to follow along with Makerpad tutorials, chiming in on the Slack channel, joining office hours and I rapidly found myself in danger of becoming useful at building no-code projects. ‍

Getting up to speed in no-code can happen really quickly. Learning through projects is also a really motivating way to learn. So can you take us through some of the no-code projects have you built in the past and what tools did you use for them?

A big part of my no-code journey has been experimental, just testing the edges of tools to learn and understand what's possible for future endeavours but also from time to time I need to knock something functional together for myself. My first project was creating an official business site for my side projects LazerBird. I built that site using Webflow. Next I did some consultancy work for an education business that involved connecting WordPress plugins, Zapier and Google Sheets together.

‍Then around March 2020 I decided to try my hand at building something new and I created Adepty which provided tools for the service economy who had been impacted by the early lockdowns. After witnessing the harsh impact of the Covid crisis on many independent service providers I created Adepty as a means to help provide access to important tools like appointment scheduling, online payments and identity verification and get them setup quickly. ‍

Through Makerpad I discovered marketplace builder Sharetribe and initially I went the 100% no-code route with Adepty using Sharetribe GO and got the feelers out with a MVP. Once I got some traction and feedback I graduated to Sharetribe FLEX which did involve working with a developer for the front-end but I still stuck to no-code tools for the email and database functionality. More recently I've helped out a few artists and musician friends with quick and professional Carrd sites. I've done a virtual St Patrick's Day party in aid of the Irish Cancer Society so I quickly put together Dephly using Webflow and I added a referral program courtesy of a tutorial from a Makerpad member. ‍

Sharing your no-code skills to help others with their businesses is a great feeling and shows how you can make a big impact just by learning some valuable skills. So let's bring things up to the current day, what are you currently working on and what stage is it at?

Adepty is still reasonably early, just under a year old but my passion project at the moment is doing well. I've had ~4900 users and I track them using Google Analytics. It has also had nearly 200 seller sign ups and under ~$1k of revenue. Sign ups have included anyone from professional magicians, art teachers, astrologists, lactation consultants and online tailors. It’s a project I plan to refine based on the feedback I get from the community. I tried to cover too many bases too soon, so I’ve learned from this and next I’ll refine the idea more around a single goal.

I’m also the founder of the Athens chapter of the IndieHackers community. Bringing together founders behind profitable online businesses, and connecting them with others who are starting and growing their own companies.‍

Building a project and refining it over time really teaches you a whole new set of skills, gathering feedback and creating a new vision for what it will look like in the future.  Thinking more of the future, what are you looking forward to seeing happen in the no-code space in the years to come?

I want to be hearing about inspiring stories of how someone with no technical background built their MVP with a few no-code tools and reached millions with a minuscule budget. Beyond the intrigue of the individual tools, it will be the application of those tools that will capture the imagination. It's nice to have walk through tutorials of how you might build an Airbnb clone but it would be far more exciting to hear how new original businesses prospered with no-code tools.

I also made a prediction a while back about the future no-code. At some point within no-code there'll be a 'Flappy Bird' moment, where something built with no-code that’s simple, functional and well-designed will take off and it will accelerate the adoption of no-code tools. There will be a product that’s the tipping point that will bring no-code to the masses.

We can’t wait to see what the future of no-code looks like! We’ll end on a couple of quick questions - do you have a favourite no-code tool? And what's the next no-code tool you're thinking of trying out?

Webflow is currently my favourite no-code tool as it’s what I used to build LazerBird in. Bubble is the next on my list to try out as I’ve seen how powerful it is and what can be built in it.

Thanks so much for sharing your story with us Ciaran. We look forward to hearing more about your journey soon!

How to integrate Circle (community forum) with Memberspace
Close