You're in 😍- check your email to get started. Tweet me what you want to build to see how to do it without code.
Oops! Something went wrong while submitting the form.
Stories
/
Winning a competition and building a business

Winning a competition and building a business

Hey world, my name is Hiram and I'm an ex-EY consultant turned indie founder/maker. I've built two no-code products: The TXT Hub and Tee Tweets, and I'm working on more. The TXT Hub (sometimes also squished together as theTXThub) allows you to text famous quotes from celebrities and TV shows to anyone in the world. I originally built it as part of a no-code competition, which I ended up winning (thanks y'all).

My original goal was to learn how to build something completely new from scratch using zero code. It just so happened to be that I also came across that no-code competition, and decided to join as a way to be more disciplined about my progress and deadlines. I also wanted to make sure that the product didn't exist beforehand. It's something that's fun and sort of gimmicky, but people seem to enjoy it nonetheless to prank their friends, colleagues, and family members.

The way it works is very simple: Choose from any of the Wires. Currently, we have quotes from:

Once you've picked a Wire, choose how many quotes you'd like to send to your recipient. That's it! In random intervals of 3-15 minutes apart, your recipient will receive random quotes from that Wire.

The pricing is also straightforward: 50¢ per quote. So 10 quotes = $5. No subscriptions, commitments, or anything like that. 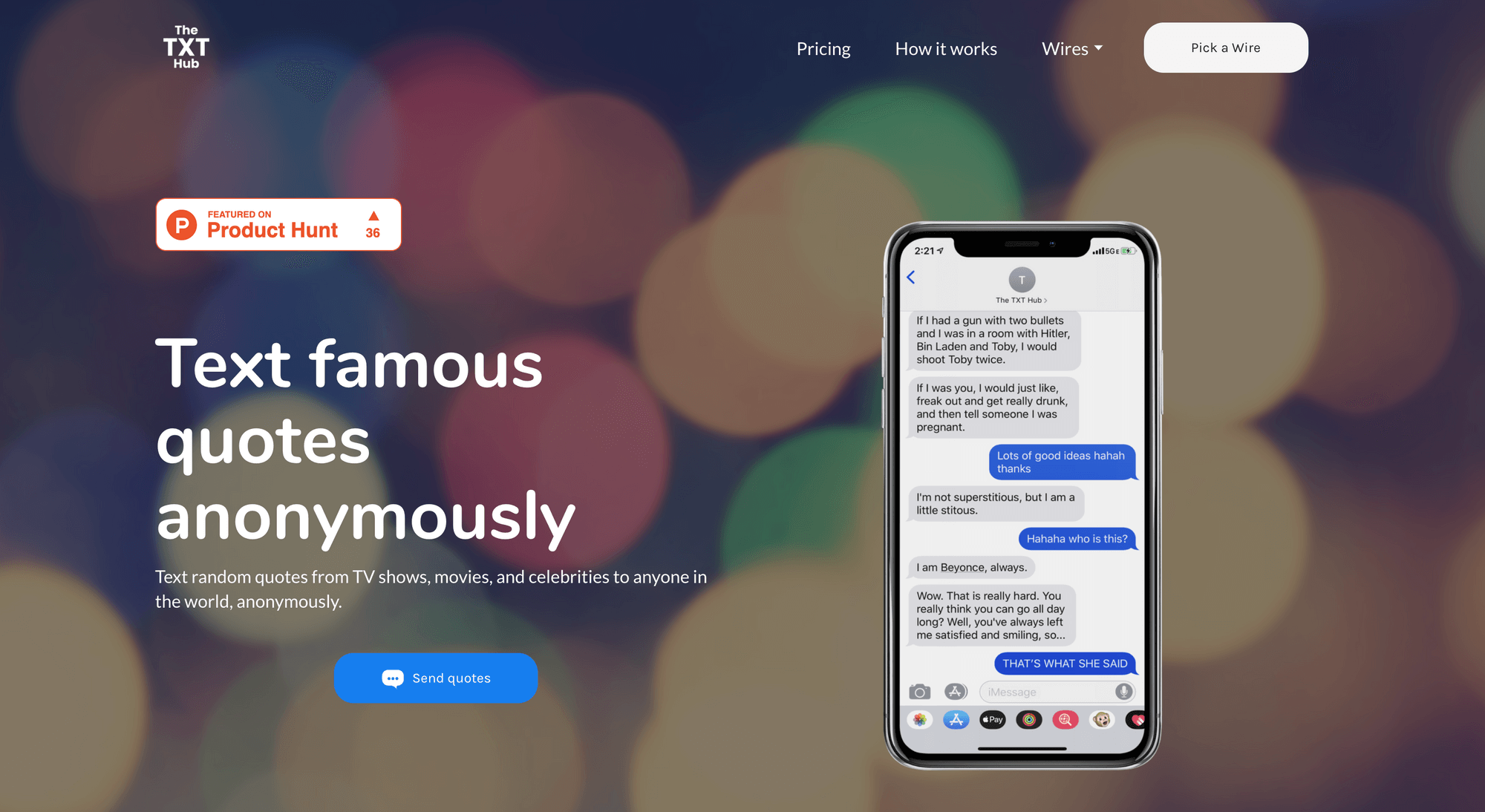 All things considered, the process flow is quite simple. However, putting it all together was quite a puzzle. I built most of the pieces independently before worrying about the integrations that this would require. This means that I built the website, the forms, and Google Sheets before putting the pieces together. I'll try to explain as concisely as possible below.

This was probably the easiest tool to work with. However, it's Calculator feature is not the most intuitive and could use some work. It was quite limiting in how I could calculate the number of texts being sent times the price.

One of the nice (perhaps overlooked) features about Typeform is that you can give it some design flair. If you click around the different Wires offered, you'll notice that they're all on simple and on theme for that particular Wire:

MailChimp is quite straightforward. It simply houses the names and emails of people who send the quotes off to their friends, family, and coworkers. Its only use is to store these audiences, and receive notifications if the recipient replies to one of TheTXTHub's texts.

As with any email service, the sender can opt out of receiving emails when the recipient responds.

Twilio is the service that actually sends the SMS texts. It's a very advanced tool used by some of the biggest companies in the world to streamline their communications. It's far from a no-code tool—in fact, it was made specifically for developers. However, for the sake of this project, I only used basic functionalities that made this work.

All that was needed from Twilio was the "Programmable SMS" service. They also have voice, WhatsApp, and more. Didn't use any of those though.

Not much to say about Twilio, other than the fact that it's what sends/receives messages.

I won't say too much about Google Sheets since most of us have worked in Sheets or at least know what it is, but basically this is where the information from Typeform gets stored in a structured way.

I want to point out that it's structured, because it's important to note—keeping templates and structure is key.

Stripe is the simple gateway for accepting payments. Stripe actually has a built-in integration capability with Typeform, so if you use Typeform, you can use Stripe directly on the form. There's no need to set up Stripe separately (aside from creating a Stripe account) to begin accepting payments.

Zapier is what integrates Typeform, Google Sheets, Twitter, MailChimp, and Twilio. The way the platform works is quite simple: You have a set of rules and commands that you can work with through different platforms.

Once everything else was set up, it was just a matter of tinkering with Zapier to create "Zaps" as they call them to do what you'd like to do. For example:

The specifics of each zap are not too important, since there are a few ways to achieve the same output. The important thing to note is that Zapier brings together all these platforms to create a cohesive workflow that outputs what you need.

"Even to this day, I'm surprised by some of the products I've seen launch. It's gotten to the point where it's tough to distinguish a product built with code and one built without" 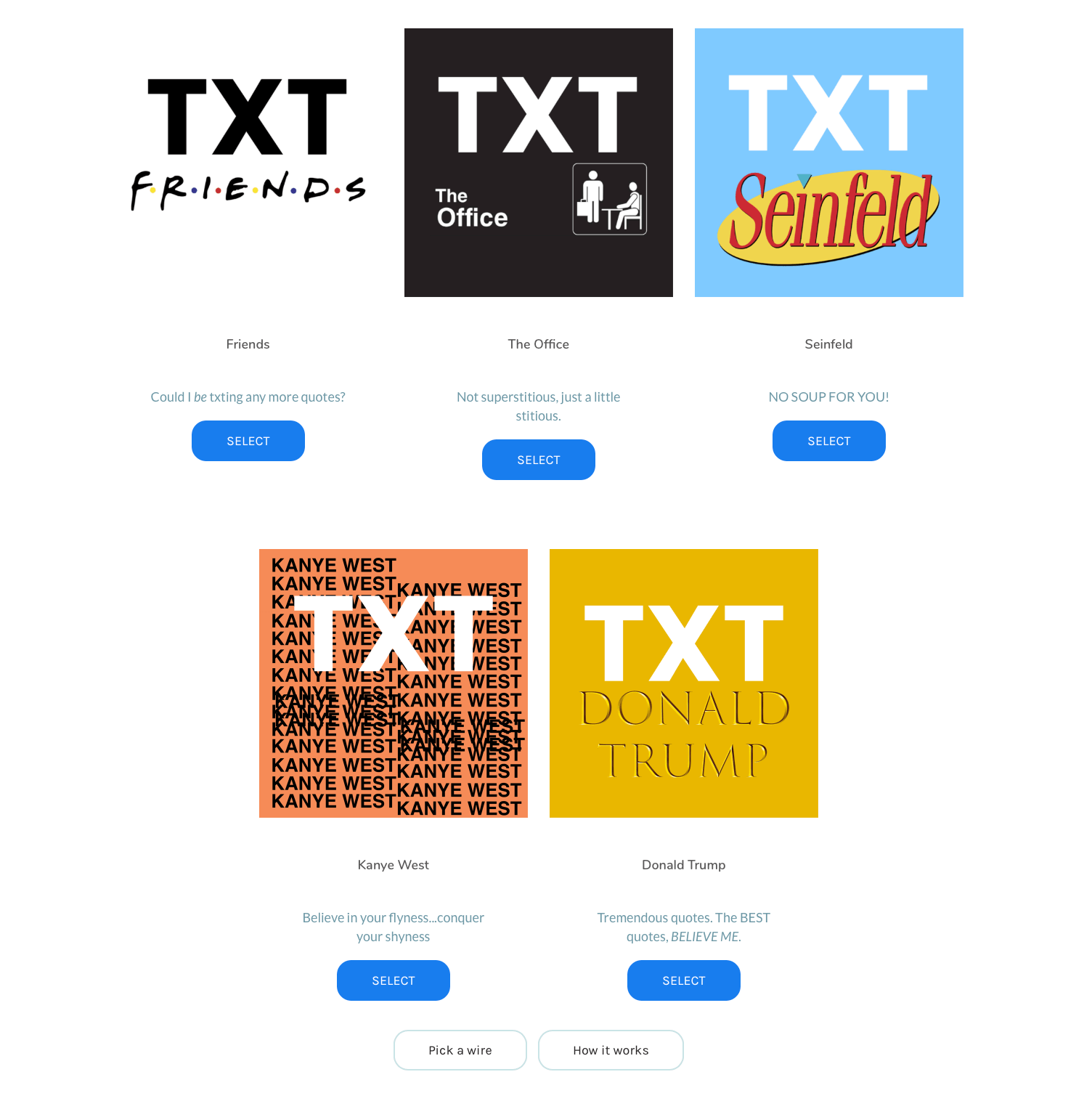 The no-code market has really come a long way, even in these past two years that I've been more heavily involved in it. I'm honestly quite fascinated by the evolution that I've seen in the no-code space. As I mentioned earlier, I originally built The TXT Hub to learn more about these no-code tools, and I'm glad I did. Over a dozen people already, when I told them I built a communications/texting app, ask me, "How can you build a texting app without code?"

Even to this day, I'm surprised by some of the products I've seen launch. It's gotten to the point where it's tough to distinguish a product built with code and one built without. Most of the time, you can't even tell. Some still do have their limitations of course, but even then, it doesn't mean that 1) the limitations are dealbreakers, and 2) those limitations will never change. As the space evolves, we'll only see advancement. The big players in this space like Bubble, Webflow, Zapier, are a testament to that. I hope we reach new levels of depth across these tools in the near future as they continue to democratize building products for everyone.

"The no-code market has really come a long way, even in these past two years that I've been more heavily involved in it"

Always glad to connect with other indie hackers, regardless of where you are in the code/no-code space. Also happy to collab on projects or help out. Hit me up anytime.