A history of the no-code movement: from 1982 to today 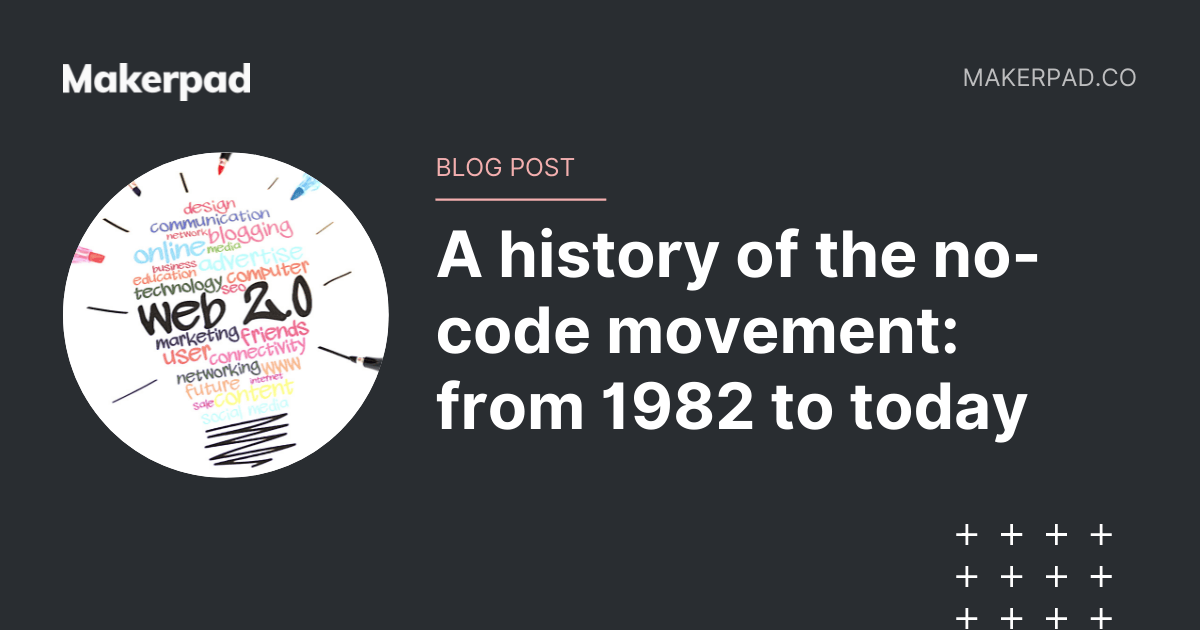 Product, Growth, and Marketing teams are constrained by engineering backlogs. The engineering coding tools and associated processes have gotten better, but demand has grown faster. The holy grail has been to find a no-code solution that empowers customer-facing teams to create what they need without having to engage engineering.

It has taken a long time, a number of false starts, and a significant amount of underlying infrastructure.

But the no-code movement is now here for frontend development.

What is the no-code movement?

In 1982, James Martin published his 15th book on the software industry, Application Development without Programmers. From the preface, he states, "The number of programmers available per computer is shrinking so fast that most computers in the future must be put to work at least in part without programmers.”

The industry has been trying to address this issue for a long time. The good news is that the underlying infrastructure is now in place to enable no-code tools for the frontend, and we are starting to see solutions in production.

With the rise of Web 2.0 in 2004, developers began taking an API-first approach to coding, leading to the transition from monolith to microservices and paving the way for the integration of third-party tools. Graphic user interfaces allowed for a visual approach to building workflows so that, ultimately, anyone could become a “programmer,” regardless of their coding skills.

The no-code movement has empowered the teams closest to customers to take control of everything from marketing to analytics, freeing up developers to work on the core product.

Let’s take a look at the software and tools that have made it all possible.

From its very inception in 1993, inventor Tim Berners-Lee made it clear that the World Wide Web was meant for everyone. The reality, though, was that web building was reserved only for those who knew HTML.

Geocities changed all of that in 1994, hosting personal homepages and more Britney Spears fan sites than the world ever needed. The rise of online journals and blogging platforms like LiveJournal and Blogger brought some hefty competition, and Geocities’ popularity took a hit.

Wordpress launched in 2003, outperforming Geocities in almost every way until it folded in 2009.

Other no-code web builders like Squarespace, Joomla, and Wix all launched between 2004 and 2006 and have gained widespread popularity for both corporate and personal sites, but Wordpress still powers over 40% of sites on the internet. All of these builders rely on templates, but Webflow came along in 2017 to give designers even greater creative freedom with a no-code option that lets users build from scratch.

From Geocities to Webflow, the no-code movement has empowered anyone to build websites, fulfilling Berners-Lee’s original vision.

That’s when Gary Thuerk, a marketing manager at Digital Equipment Corporation sent the first email blast to 400 Arpanet recipients. He’s now known as the father of spam, but he’s also the father of email marketing, generating $13 million in sales from that one email alone.

In the mid-‘90s, email as we know it took shape with the release of Hotmail and Internet Mail (Microsoft’s precursor to Outlook).

It was right around this time that HTML was introduced as well, enabling marketers to transform plain text emails with graphics, colors, formatting, and fonts (and SO much comic sans!).

Of course, it wasn’t the marketers themselves but, rather, HTML-savvy developers who were formatting the rich text emails of the ‘90s. The marketers would have to wait for the release of no-code tools to do much of anything on their own.

Mailchimp changed the game in 2001 with email newsletter templates and marketing automation services. Since then, plenty of competition has cropped up, from the industry-leading Hubspot in 2006 to the lesser-known Klayvio in 2012.

Regardless of which you choose, all of these no-code tools allow businesses of any size to take control of their email marketing campaigns without using up engineering resources.

More complex than web building and email marketing, data analytics is the latest field to embrace the no-code movement.

Companies like Business Objects, Cognos, and Hyperion created business intelligence (BI) software in the ‘90s, which quickly found its way into the hands of high-level managers and executives. Self-service BI followed in the late ‘90s and early 2000s, led by vendors like Tableau and Qlik.

While self-service BI brought data analysis to the corporate masses (think business analysts and sales teams), it was still based on the burdensome task of writing SQL queries. Tableau was one of the first to move away from SQL, introducing VizQL in 2003 to allow for queries in natural language.

What’s next for no-code?

The no-code movement is sweeping every corner of SaaS, taking over functions that once only developers could perform. Thanks to visual interfaces, anyone can build UI components with Candu, edit vector graphics with Figma, or automate work processes with Zapier, to name just a few.

Ultimately, what this all boils down to is better, faster product experimentation.

When we offer tools that change who can create, we drive down costs. No longer is it only the tech giants who can afford a culture of experimentation. Now, even the tiniest of startups can test variants to their heart’s content until they perfect user engagement. And that means better SaaSproducts and happier customers.

Want to learn more about the experimentation piece? Schedule a demo or try Candu for free.

Candu
Blog Posts
What's your story?  Tell us how you use no-code
Want to contribute to Makerpad? Learn more.
Something wrong?
Suggest a change