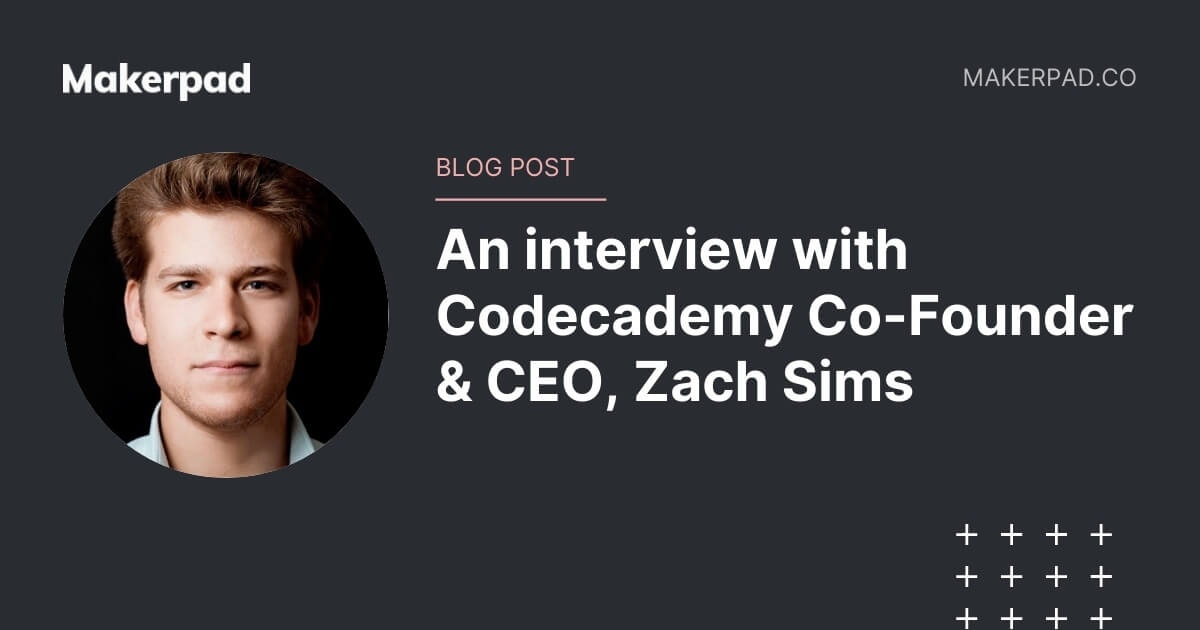 Zach Sims is the co-founder and CEO of Codecademy — a leading platform for coding education, with over 50 million learners to date. As the gap between code and no-code continues to get smaller, we were curious to find out more about Codecademy and get Zach's take on building both with and without code.

From your perspective, how has online education changed in regards to learning how to code since you started Codecademy?

Since Codecademy launched in 2011, interactivity has become much more prominent in online learning. Rather than watching a lecture on video, interactive features offer the opportunity for students to put new concepts into action as they learn.

Today, online learning trends have only accelerated during COVID-19. With the world shutting down, more and more people have recognized that you can learn effectively online — especially when you’re learning by doing.

You dropped out of Columbia University, pursuing a Political Science degree, to start Codecademy. Why? What was your relationship or background with coding at the time?

When I was in college between 2008 and 2011, the tech industry was rapidly taking off. I was fascinated by the world of startups and quickly realized that what I was learning in the classroom did not align with what I wanted to do in my career. Without any formal training or background, I tried teaching myself how to code, which ended disastrously.

Seeing the surge in job opportunities for programmers, it became clear that traditional education was not preparing people for the jobs of the 21st century. My co-founder and I saw an opportunity to change that by providing a new, more accessible way of learning in-demand skills online, which was the spark for Codecademy.

For someone just entering the coding world, which coding languages or paths would be the most beneficial to learn first?

At its core, coding is a form of problem-solving. When you learn your first coding language, you’ll learn how to think like a programmer which will make it easier to pick up other languages in the future. For a beginner, it’s less important which specific language you learn and more important that you’re diving in and beginning to develop those problem-solving skills.

That said, there are several languages that are useful for bridging the gap between code and no-code. Understanding the fundamentals of language like Javascript for interactivity and automation, HTML and CSS for web development, or SQL for querying databases, can enable you to add customization and take no-code projects to the next level, depending on which platform you’re using.

Do you use any ‘no-code’ tools in your day-to-day? If so, which tools?

Personally and as a company, we use tools like Notion, Airtable, and Zapier.

You recently raised $40m — what objectives are you hoping to tackle with the latest funding?

This is an exciting milestone for us, as we’ve grown a ton over the last several years. We’ll use this round to accelerate our growth and invest in new products and curricula, including new subject areas and domains. We’ll also focus on expanding Codecademy for Business, our new B2B offering that launched last year, as well as our footprint in growing international markets like India.

As the CEO of a coding educational platform, what are your thoughts on the no-code movement?

Here at Codecademy, our mission is not unlike that of the no-code movement. Our goal is to democratize technology and help people unlock code’s potential. Whether it’s with no-code, a little bit of code, or code that’s written entirely from the ground up, we’re driven by the possibility that anyone can build something meaningful with technology.

Deciding between code and no-code shouldn't be a question of one or the other. Rather, the two can be combined in a really powerful way to help people achieve their goals more quickly and efficiently.

How do you see the need for coding skills evolving over time with the emergence of low/no-code solutions?

More and more people are going to need basic coding skills for their jobs, even if they aren’t traditional programmers. Low-code/no-code tools help remove the barriers to entry, allowing more people to use technology in ways they may not have otherwise. From there, they can continue learning foundational coding skills to take what they’re building to the next level. There will always be a demand for programming, and low-code/no-code helps get more people through the door.