How no-code is connecting Rwandan farmers with investors 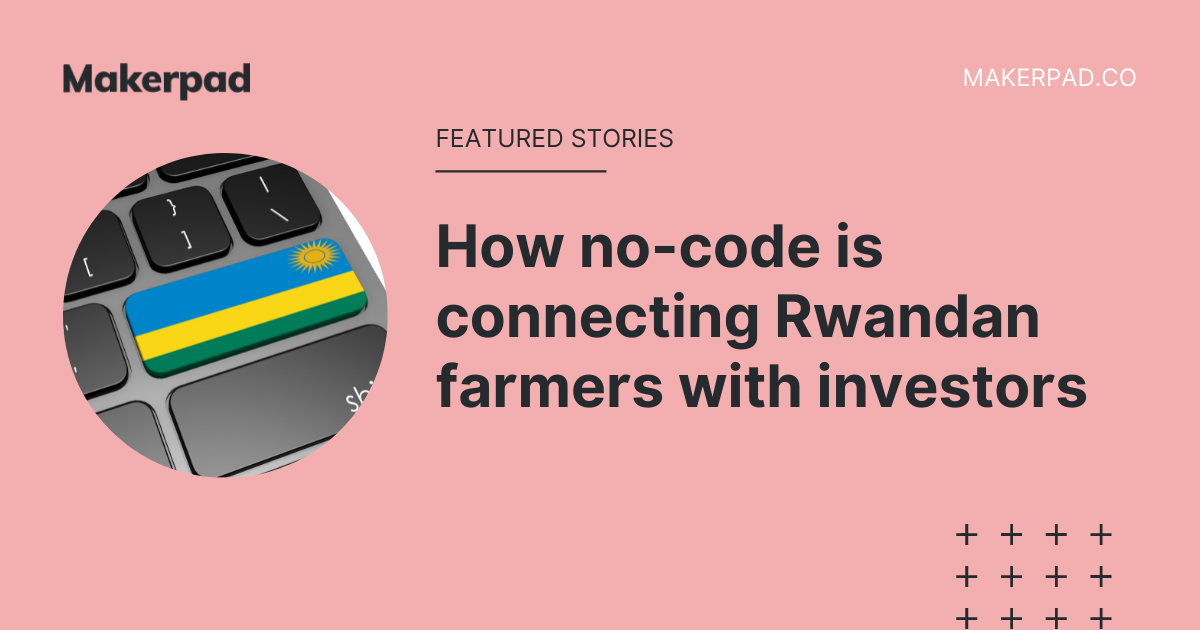 Our featured stories are centered around pioneering makers that have used no-code tools to solve some pretty unique problems. We’re always blown away by the creativity we see in these solutions, and we’re inspired by those that have the courage to do things differently.

The goal of no-code is to democratize software creation and make it accessible to everyone. Here’s how no-code is filling a need in Rwanda’s agricultural sector, thanks to Nadia.

Here is her story.

My name is Nadia! I live in Kigali, Rwanda. Not many people know where that is, so I’ll give you a hint! It's in East Africa near Tanzania (you know, Mount Kilimanjaro, the big 5, and all that cool stuff). Rwanda is a tiny landlocked country with a population of 12 million.

I started the first no-code academy in Africa last year — it’s called No Code Campus. The goal is to help bridge the digital divide and empower youth to create their own jobs and contribute to Rwanda's agenda of becoming a knowledge-based economy. We teach young people between 18 and 30 how to build apps and websites without code. We hope that by 2021 over 200 students will be familiar with the most popular tools on the market.

I also started a company called Shoraweze, and that’s the no-code journey that I’ll be sharing with you. It’s a crowdfarming platform based in Rwanda. The inspiration for Shoraweze came from learning about one of the biggest challenges faced by small-scale farmers in Rwanda: low access to capital resulting in poor yields and low income for farmers.

Farming is profitable if you do it right, but most farmers lack access to affordable capital, banks charge extremely high interest rates of about 18-20%, and they ask for collateral. Most farmers don't have any collateral so they're not eligible.

The problem we're solving is two-fold:

I figured it's a problem I could solve using no-code. Like most no-code platforms, ours is built using no-code too! The first version was built with SpreadSimple; now the platform is built on Noloco.io. I found it easier to use than Bubble, and the team was very helpful.I made the logo with Canva, and I use PandaDoc for the contracts. Both are on the free tier, but there's a lot you can get done without spending a lot of money!

A new breed of digital farmers

I have a brand of organic chia seeds so I figured we'd start with that. Using our platform, those with disposable income could invest in profitable agribusiness opportunities such as chia seeds farming for a healthy return (25-30% per cycle of 4 months). We've added more crops and other farming activities such as poultry farming.

A user can pick a farming activity to sponsor in exchange for a healthy return on sponsorship after the harvest, ranging from 25 to 30%. Once the pledge is made, they sign a contract and have a week to make the payment.

So far we have digital farmers from the USA, Canada, South Africa, Norway, Switzerland, and even from right here in Rwanda. Most of our investors are middle working-class folks that don’t have time to get into business or farming.

This was in just the first month! We hit a whopping $16,200 in sponsorships – all of that was paid by digital farmers. The conversion rate from pledger to sponsor is 90%. Our main acquisition channels were LinkedIn, Facebook, and WhatsApp statuses. We’ve run no paid ads so far.

I do everything myself for now (vetting new opportunities, marketing, community management, and customer support). I still do the onboarding myself, which means I get to talk to each of the digital farmers, and it’s a delight! In fact, I was just offered $24,000 for 20% equity. I know the numbers don’t sound big, but it means a lot to me to get an offer like this after only 2 months of activity!

We look forward to the new season starting this September!

Check us out on: https://shoraweze.com/

I think no-code represents a great opportunity for the African continent. If you're based in Africa and reading this, let's connect on Linkedin. I manage a group called "No-code for Africa".

To any aspiring maker, this is a reminder for you: it doesn't have to be perfect, just launch.

Build a subscription-based publication with WordPress, Mailchimp and Pico
Close