Introducing thirdweb: Can anyone now build their own Web3 app? 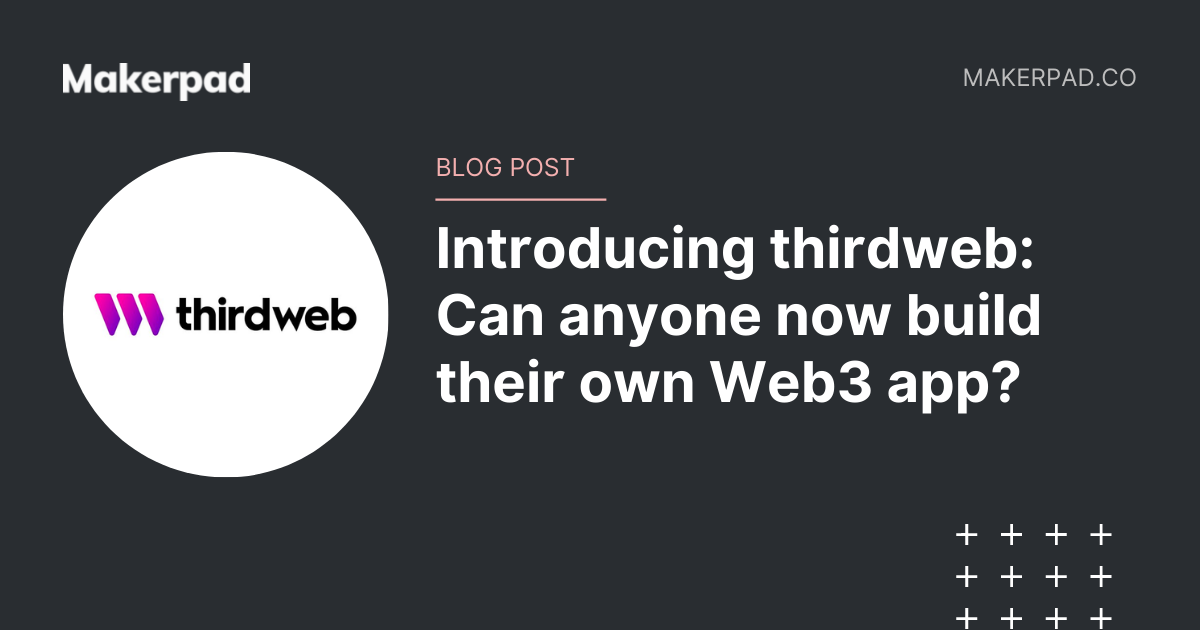 If you’ve had your ear to the ground, you may have heard a lot about NFTs, Web3, cryptocurrency and blockchain technology in the months of late.

Of course, cryptocurrency is nothing especially new — the first ever Bitcoin transaction happened back in 2009. But thanks to companies like thirdweb, we’re seeing a new and exciting transition that we predict will truly bring Web3 to the entrepreneurs and creators who up until now, haven’t known how to capitalize the Web3 movement for themselves.

Launched in December 2021, thirdweb is the product of Steven Bartlett (Social Chain founder and newest investor on Dragon Den, the UK’s version of Shark Tank) and Furqan Rydhan, founding CTO of Bebo and AppLovin. It’s backed — to the tune of $5m — by a series of A-list investors including Gary Vaynerchuck, Shaan Puri, Ryan Hoover, Greg Isenberg, and Packy McCormick amongst others.

But impressive names and figures aside, what does thirdweb actually do?

thirdweb is a platform that provides a suite of tools for creators, artists, and entrepreneurs to easily build, launch and manage a Web3 project. It enables users to add features such as NFTs, marketplaces, and social tokens to their Web3 projects without writing a line of code.

According to Bartlett, he and Rydhan “built thirdweb to allow entrepreneurs, developers, brands and creators to unlock the potential of this 3rd iteration of the internet in the easiest way possible — without having to learn a brand new coding language and without needing to hire a completely new team. In the same way that Stripe made payments easy for builders and creators, thirdweb makes Web3 easy, unintimidating and accessible."

For those of you wondering, here’s an explanation from thirdweb’s co-founder, Steven Bartlett:

“Web1: all you could do was read information — books, magazines, and newspapers could be accessed at the click of a button. We were just scratching the surface.

Web2 introduced social networking — it connected us and turned readers into creators, but in the process it handed control of the internet to a few individuals.

Web3 is a version of the internet which will be owned by the people who use and build it, enabled by the blockchain and made possible by NFTs. Art, concert tickets, digital fashion, music, video game collectibles and even your audience — you can now truly own these things, creating a trillion dollar digital economy which is consuming every single industry.”

So Web3 is about ownership?

Ownership is something that's always been important to people, especially creators.

Although we’ve all interacted with digital assets our whole lives, up until recently it hasn’t been possible to place ownership on them. At the extreme end of the scale, artists who’ve spent their whole working lives curating a living online have seen their entire work lost because of a Web2 platform’s careless algorithm.

With Web2, you never really own what you put online. In essence, Web2 has done a really bad job of allowing and distributing the value that the Internet created to the builders and the creators who use it.

Web3 provides a much better architecture to distribute value and allow people to capture the value of the work they create.

What is an NFT?

NFTs (short for Non-Fungible Tokens) are digital items that you own. Proof of ownership is stored on a blockchain — a digital database that is publicly accessible.

Without thirdweb’s services, building Web3 apps takes a lot of time and costs a lot of money. We’re in the nascent stages of blockchain technology, and utilizing it is complicated. thirdweb sees itself as a platform that lowers the barrier to entry, and accelerates the build-to-launch process by months.

What does it mean to “build a Web3 project”?

Web3 projects can really be anything that utilize blockchain technology in order to function. In other words, they are decentralized apps allowing anyone to participate without monetizing their personal data.

What types of projects does thirdweb enable?

A large portion of thirdweb’s customer base is using the company’s services to manage NFTs for membership. Using thirdweb’s technology, customers can create a collection of NFTs that act as a token to unlock future utility, which could be access to a private community, gated content, future product experiences, or digital experiences.

A good example was the work thirdweb did with 100 Thieves, a big eSports team in the US. The thirdweb team built a simple platform for 100 Thieves users that enabled them to claim NFTs without having to step away from the platform to create an NFT wallet.

A championship isn't just for our players to celebrate.

You believed in us.
You cheered alongside us.
We have a special gift for you.

A commemorative digital 100 Thieves championship chain. Available now for free for everyone.

As a result, they had over 700,000 people claiming an NFT, many of whom had never entered into cryptocurrency before.

Many Web2 apps can take advantage of Web3 technology. According to thirdweb, it’s becoming more common to see businesses add Web3 features into their playbook.

For example, a SaaS business that wants to allow people to gain early access to the platform could do that with an NFT drop. Users could hold that token, which gives them early access to the platform, and then sell it on to someone else once  they've used it. The SaaS business could take royalties from every secondary sale, making it both a fun experience for the user and a lucrative revenue model for the business.

A DAO, or Decentralized Autonomous Organization, is quite simply a way of organizing a group of people with similar interests using the blockchain. Typically these kinds of communities run in a way which means the entire organization has authority over itself, i.e. decisions are made by the whole group and not by a few at the top. Documentation and anything else governing the organization (aka smart contracts) can be kept on the blockchain meaning that governance is secure and also decentralized.

Often, DAOs will sell membership in the form of NFTs, and it is this concept that thirdweb can help launch for its customers.

According to thirdweb, a recent customer of theirs is a brand wanting to build a marketplace for augmented reality (AR) NFTs. This will be the first of its kind—a marketplace where people can sell and trade NFTs that can be used in virtual reality games and platforms.

thirdweb is also facilitating the launch of large-scale NFT collections, and games that have digital economies.

So how does all of this relate to the no-code community?

We’re always on the lookout here at Makerpad for companies and tools we think can propel no-code builders forward. And thirdweb is a prime example.

Although it’s still early days, thirdweb has what they refer to as no-code features, low-code features, and SDKs — a devkit for programmers to use in their own projects.

One example of a no-code feature they offer is a widget for people selling NFT collections. If you’re building without code, you can simply copy the widget code thirdweb will create for you and embed it on your site builder.

They can also guide you through adding a ‘Connect your wallet’ button on your site, so that your users can use their cryptocurrency without navigating away from your platform.

thirdweb is still in early access mode but it’s clear that the company is already becoming instrumental in what Bartlett is calling “one of the greatest technological shifts of our lifetime”.

You can keep up with thirdweb on Twitter and Discord.