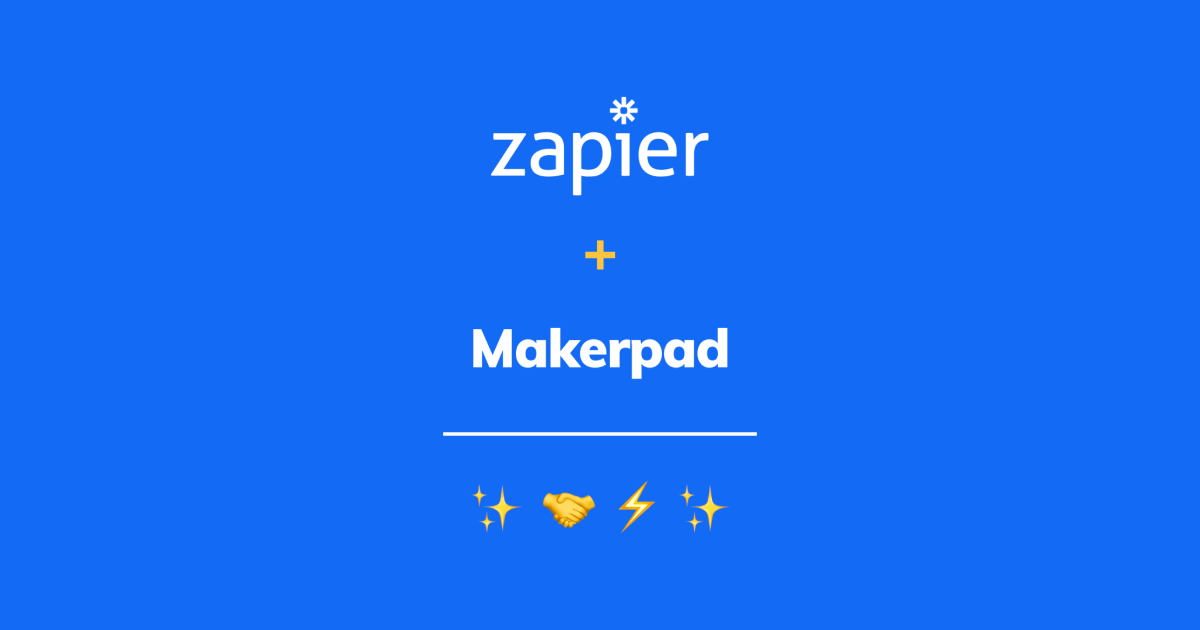 We’re really excited to announce that Makerpad has joined Zapier.

I started my journey into what is now known as “no-code” back in 2016. The no-code movement hadn’t yet started, the community was non-existent, and there was, by comparison, a scattering of no-code tools and options for automation.

Fast-forward to today, and no-code has grown bigger than I had imagined it could. Huge amounts of money are being raised and invested, new tools are continuously being developed, and the community is growing at an exciting rate.

I founded Makerpad in 2019 as a way of showing people how to build things without needing to know how to code. I think part of what made it so successful so quickly was that the content I was putting out through Makerpad was educating people on the democratisation of software development.

This desire to democratise software, and push towards a future where people aren’t limited by a lack of coding knowledge, is a vision that unites Makerpad and Zapier.

Our conversations began late 2020, in a somewhat unorthodox way. Off the back of this tweet saying “Zapier should buy Makerpad ASAP”, Wade (CEO and co-founder of Zapier) reached out and said that the tweet was not wrong. Wade and I went back and forth and soon realised that our visions for the future of software development were aligned. I really feel that the two companies are a perfect fit for one another: Zapier is the glue binding no-code tools together; Makerpad is the education and learning community that brings people together.

It goes without saying that Zapier is doing incredible things for technology. With a non-traditional funding history, the company has grown into a hugely successful brand, employed a talented team of over 400 spread all over the globe, devised a killer SEO strategy, and most importantly, changed how the world moves and works with tech. I couldn’t be more proud that Makerpad will now be working alongside them.

Looking ahead, now that we have the backing and support of Zapier, there will be some exciting things happening at Makerpad. Together, we can take no-code to heights that would have been tough to do on our own. We hope to reach and educate people in all corners of the world, and work towards democratising software on a global scale.

There won’t be any major changes for now — you can still expect the same team and community. We’ll continue to make the high-quality, unique content you’ve come to know Makerpad for. With Zapier behind us, this can and will only continue to get better and better. We’ll be announcing more details over the coming days and weeks.

I want to say thanks to every one of you that has supported and believed in Makerpad. I’m thrilled to be on this journey with you all, and I can’t wait to bring you along for the next chapter.

You can read more about our news on TechCrunch and Zapier.

Announcements
Blog Posts
What's your story?  Tell us how you use no-code
Want to contribute to Makerpad? Learn more.
Something wrong?
Suggest a change