Join our live cohort course starting Jun 21. Build a business, launch a side-project, or finally start that idea you've been sitting on, without writing code. 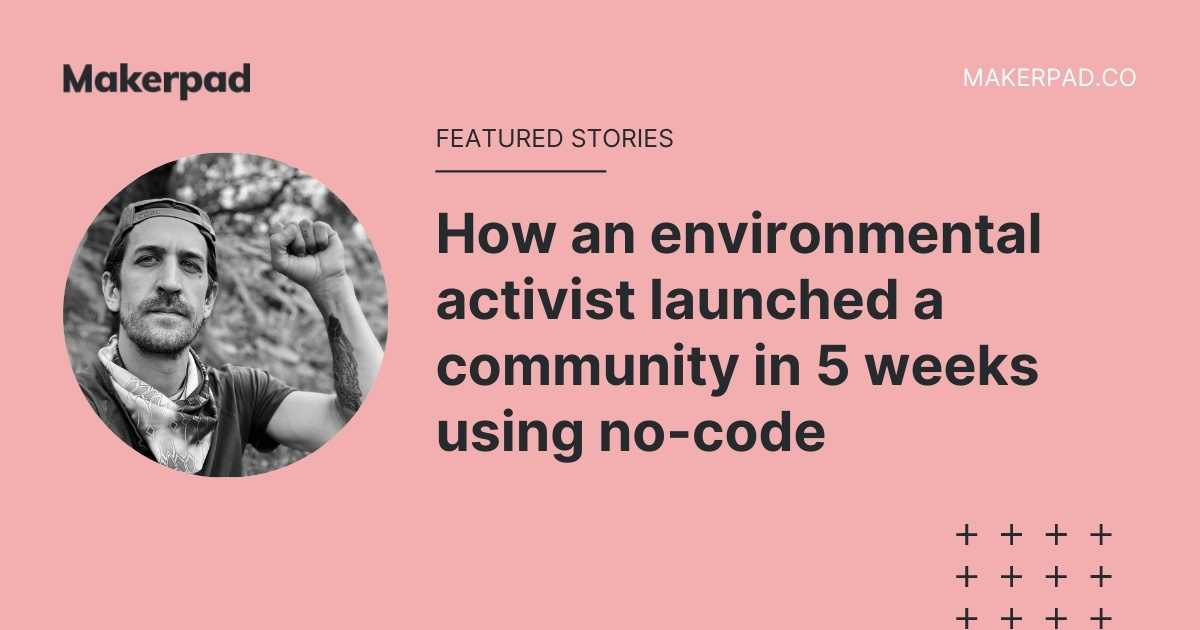 Starting a community online, where a certain degree of tech experience and the knowledge to get it launched are necessary skills, isn't as simple as it may sound.

Virtual communities may be springing up everywhere, but this doesn't necessarily make them easy to set up.

Tim Falls, an environmental activist and community builder from California, had been wanting to get his climate community project off the ground for a while. But a lack of confidence in his ability to execute his project from a technical standpoint left him stuck in v1 and unable to launch.

A passion for bringing people together

“I'm currently building two brand new communities to address the climate emergency: ClimateFriends.community (a community for processing the emotional experience of climate change) and WorkOnWater.co (a community for water conservation through grey water reuse and other practices).

“I'm passionate about climate justice and advocating for the rights of BIPOC communities, who are disproportionately affected by human-caused climate change. I love being outdoors and experiencing the wonders of nature — I'm also a student of permaculture and am pursuing my Permaculture Design Certificate.”

The idea for Climate Friends started when Tim personally experienced a major shift (downturn) in his mental health, as he learned more and more about climate change during an online course he took with Terra.do.

"As I made my way out of that emotional and psychological dip with the support of my therapist, wife, teachers, and other people around me, I recognized that community is one of the critical keys to our species' survival of this climate emergency."

Tim has also joined and participated in several climate communities, and observed a high demand and level of interest for these groups where people can support each other.

And so the idea of Climate Friends came to be.

Tim's also surveyed some of the climate communities he was part of to get their thoughts on Climate Friends, and received overwhelmingly positive and encouraging remarks so he decided to get it done!

The challenge: overcoming a lack of no-code knowledge to start building

As a community builder (and like so many others before him) Tim had always previously worked with developers. He’d depended on them to build the infrastructure he needed for community operations.

Tim became aware of no-code a few years ago, and quickly realized the opportunity no-code presented to turn his ideas into real, tangible things, without needing the help of a dev team.

But knowing the potential of no-code and being able to take advantage of it are two different things. Tim admits he lacked the confidence to forge forward with no-code tools, and that held him back.

So, determined to get his community ideas off ‘paper’ (everything started as notes in Notion), Tim joined the inaugural Makerpad No-Code Fundamentals course cohort in April this year. He hoped the course would help him shift both his confidence and his building ability into second gear.

“Before the Makerpad course, no-code was still quite mysterious to me. I was intimidated by the prospect of attempting to navigate it on my own. That's why I wanted to take part — and I'm glad I did!"‍

Getting comfortable with no-code tools, automation, and new friends

Once the course started, Tim got stuck straight into experimenting with tools and automating workflows.

For Climate Friends, he settled on Notion for his site content, Super for domain and hosting, Circle for community forum, and MemberSpace (and eventually Gumroad — more on this below) for memberships.

He continuously iterated on his project, getting feedback from the instructors and his peers until it was in a launch-ready state.

This was something that Tim found super valuable throughout the course — having the support and opinions of an entire cohort of people.

“I dived deeper in this course than I expected — that's because it was so much fun, and because there was a community of people to support and cheer me along. In particular, the breakout sessions — smaller groups prompting free-flowing conversations — often led to pretty fruitful exchanges of information, ideas, inspiration and energy.”

Climate Friends is now further along than Tim could have hoped before the course launched.

‍“During the course, I was able to pick [Climate Friends] up in earnest, and after several iterations and many hours of work, I think it has turned out pretty great — for now (we'll continue iterating and have some behind-the scenes stuff to clean up and rewire). I'm excited to say we got our first new member since deploying v2 a few days ago!”

Pivoting with Gumroad for memberships

An important aspect of Climate Friends (and many other community structures) is the paid membership tiers on offer to users who want to join.

Earlier on in the course, Tim first picked up MemberSpace to handle memberships. He got it all set up and let it run for a few weeks with some other cohort folks testing it. For various reasons, including cost, he ultimately decided MemberSpace wasn't the tool for this project.

When looking at alternatives, Gumroad had already piqued his interest — he'd used it for the ‘selling online’ section of the Makerpad course (he built his own shop to sell digital drawings) and enjoyed it as a tool.

Then he watched the Makerpad tutorial tool-path on "How to build and manage a membership community with Gumroad".

“As well as teaching Gumroad, the tool-path also used several of the other tools I was using or wanted to test out, so I was sold! At this point in my no-coding career, I really appreciate the guidance of video tutorials, and it's pretty magical when they line up exactly with what you want to build.”

And so he switched to Gumroad.

Tim says the experience building with Gumroad was quite fun and very intuitive, although there was still a learning curve.

“Since I was creating a membership element in Gumroad for Climate Friends, it was a bit different from the digital products I'd created before. After setting up three membership tiers, I got feedback from some people and adjusted it to two tiers, and refined my messaging and positioning around memberships.

“I really love the presentation of memberships using Gumroad. It was super simple to integrate this with the membership page on the Climate Friends site, and integrate that link with the Circle community (using Circle’s settings).

“I was also happy to find Gumroad is very well integrated into Zapier, so I could create triggers and actions for new Gumroad sales to kick off email invitations to new community members and record updates to the members database in Airtable.

“Overall, I love the simplicity of Gumroad and the general aesthetic, design and vibe of the tool and the brand.”

Handling bumps in the road

Despite Tim’s fortune in finding Gumroad to manage his site’s memberships, it wasn’t all plain sailing.

“I had one tiny issue with how Gumroad memberships handle the checkout process, which doesn't provide for the ideal user experience. But it sounds like changes might be coming there, based on this twitter thread.”

There’s a valuable lesson here for people embarking on projects with no-code tools.

There is very rarely ever one swiss-army tool that can do everything you want and need in one place. So choose wisely: look for the tool that does a lot (rather than all) of what you need, and opt for tools that release new features regularly.

Beyond the course and Climate Friends v2

Thanks to his time spent immersed in no-code building, Tim is now forever armed with an arsenal of no-code skills that he can use to explore new tools and further projects.

And exploring new projects he is.

He’s just launched a new newsletter, Community Building with No-Code. And his subscribers have doubled in just a week!

He’s also used his new-found knowledge to set up Work on Water, another community for raising awareness about the planet's water crisis.

I've never #NoCode'd so much😅

⛳ par for the course, I'm now *building* something I've been *talking* about for months...

Needless to say, Tim’s no-code tap (pun intended) has been turned on.

"My previous interest and excitement for Notion and Airtable have grown throughout the course. I’m especially eager to spend more time with Glide. Circle has grown on me since trying it out, and Luma recently piqued my interest, too — both for community, events, newsletters, etc."