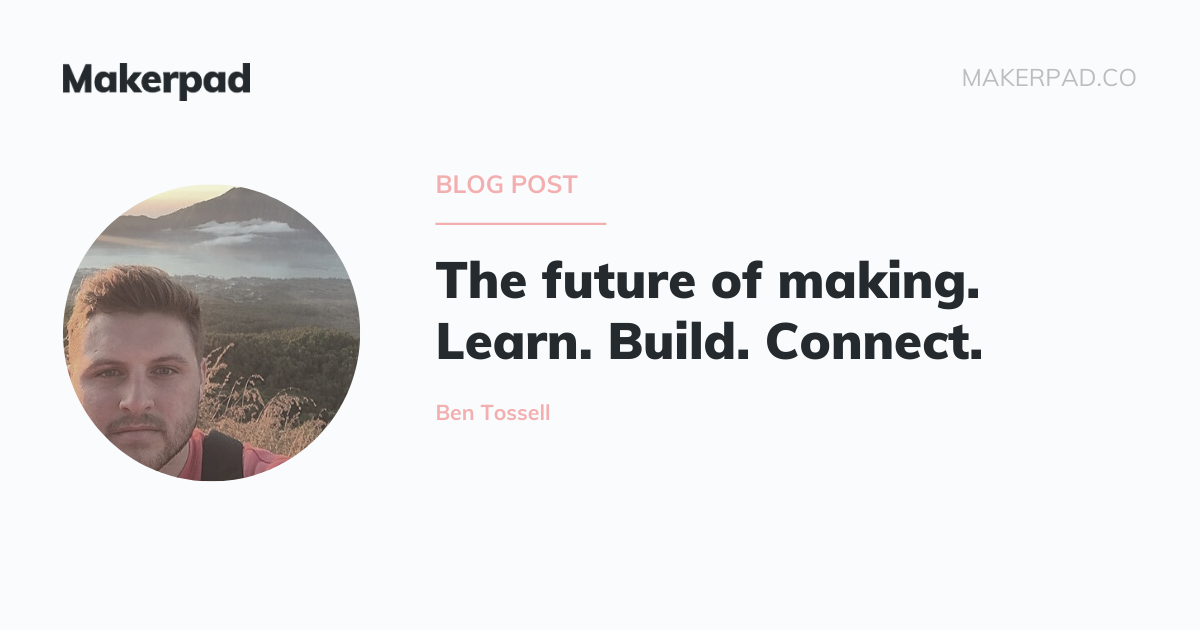 The Future of Making

We’re at a threshold for the future of building and launching products. It’s not to say that learning to code will be replaced—we’ll always need engineers— but that it will no longer be the default way to build. Since 2015, I’ve been working hard to make people aware of the possibilities of the no-code space. It’s the only way I’ve been able to build a series of products that culminated in Makerpad. Now with the help of Makerpad, we’re seeing daily how quickly people are dreaming up and creating their own products.

I noticed a change when I was at Product Hunt: a lot of the most popular products were ones that made it easier for people to build things, like Webflow and Zapier. When I left in 2017, it was with the knowledge that it was possible for me, someone who has never coded, to build anything I could think of—and that’s exactly what I did.

Makerpad was born in January 2019 as a Webflow site with a Typeform that allowed people to enter their credit card details to pay for rough videos on a password protected site of me teaching the basics of no-code software. In a little over a year, Makerpad is now an entire site with high quality videos (thanks Tom and Amie!), that hosts bootcamps as a way of proving proficiency and most excitingly for me, a growing community of people that come to learn how they can use a variety of no-code solutions to build and launch their ideas.

We want to educate the 99% of people that don’t know and don’t want to learn how to code. That’s it. I’m constantly asked what people can build with no-code, and the answer is—you can build anything. You can build a website with Carrd + Convertkit; a CRM & Sales Pipeline with Airtable; and a Directory App with Glide (learn how in the “Basics of No-Code” bootcamp)—we literally cannot create videos quickly enough to show the endless possibilities.

Even so, people continue to build. Honestly, I’m in awe of the creativity that sprouts from people who are finally able to create their own products and launch them without ever having to learn to code.

Now that the movement is maturing, we’re starting to notice another shift: from would-be entrepreneurs that were the first to adopt “no-code” out of necessity, to employees in companies that want to upgrade their skills to make their jobs easier.

It’s an exciting time to be learning on Makerpad! Just check out some of our recent launches.

We group them into three categories: Learning, Building, and Community.

Along with a series of new tutorials, we’ve started combining tutorials into more structured Bootcamps like “Basics of No-Code” and “Automation at Work”. These will allow people to learn more about what's possible with each tool by building 5 real world products. Each bootcamp comes with a certificate to show proficiency, has office hours to discuss projects and a cohort of other community members you can connect with. We’re already seeing all the brilliant projects that people are coming up with that would have never been possible. Some of my favorites are: Pim who built a tracker for feeding his plants and Greta, who's built the most projects of anyone including automated dashboards and a freelancer marketplace.

Our most recent bootcamp (launched last week) is “Automation at Work,” which aims to teach people to build sales, data and reporting, customer support productivity and documentation and customer relationship management. We’re excited to see what employees at large companies build and how this will allow those companies to build like startups.

We’re also hosting specialized workshops with creators that have built their own successful products and will show users how to do the same. And Demo Days, that focus on sharing all the unique products created during bootcamps. We’re hopeful that as we share more of the projects, people will become aware of all the possibilities of how they can become builders themselves.

By popular demand and to make building easier, we amassed a Component Library you can copy and paste for shared Zaps or Webflow templates. Instead of having to build something from scratch, people can immediately get started in bringing their idea to life by using something others have already built. It’s also a way for people that learn by doing to quickly set something up—not having an idea should not hinder people from learning what is possible with these apps.

As a way of being able to show off all the progress being made by Makerpad users, we’ve created profiles for each person. Each profile includes all the badges achieved through tutorials and bootcamps; what tools a user can use; any recommendations they’ve received from others in the community; and all reviews they’ve given products. These profiles are already making it easy for people to “Find an Expert” and people to search for jobs based on their newly acquired skills.

To say that the Makerpad community has grown is an understatement—we’re now 1500+ pro members strong and have built hundreds of products. I see our community, previously through Slack and now Circle, as a way to make organic connections happen. That’s why we’re focused on creating shared moments through office hours, demo days and our recently launched podcast. In fact, that users are helping each other learn and that they’re collaborating is perhaps the biggest sign that no-code is catching on.

What each of these things share (office hours, demo days and the podcast) is the ability to showcase the many different and clever products that people come up with. On the podcast, I’ll be talking to no-code vendor companies about what they’re seeing in this space and what they’re working on to make it easier for people to build. I recently spoke to Vlad Magdalin about Webflow, Joseph Cohen about Universe and Emmanuel Strashnov about Bubble. But I’ll also be interviewing makers too, like Kenny Hanson who built Mentor Pass and Graham Hunter, Growth at Segment, who is building internal processes with no-code using no-code tools. I hope to grow the podcast into a robust guest list of diverse and talented makers who can show the wide variety of ideas that have been built with no-code.

The Future of Makerpad

Let me take a moment to thank the Makerpad community because I’ve been lucky from the beginning to grow along with them. I’ve always valued a quick feedback loop and they have always provided that in real-time so most of the recent launches above have come about as a natural extension of what the community needs. So please keep sending us your suggestions and recommendations—we take them very seriously.

Makerpad and the entire no-code movement is here to stay. We haven’t even begun to scratch the surface of what’s possible if we enable the 99% to be able to solve problems with creative solutions. It started with the early adopters, but we’re seeing people who work at companies beginning to look for solutions to the same problems aspirational entrepreneurs faced: How can I do my job with greater ease?

To that end, we’ll be starting a new feature where we’re working with companies and helping them figure out how they can use no-code solutions to solve problems that they previously needed engineers and data scientists to do. Coming soon is our dive into how Morning Brew does sales. Companies are realizing that they can build like they once did—like startups. You can ship products within an hour on Webflow, Typeform or Zapier, get quick feedback from current customers and not spend months and thousands plus building.

It makes me even more bullish on the fact that no-code is not just a fad but a new way of building a business. I remember being told countless times that the only way I could build a product was through code and now we’re ready to move into a world where no-code becomes the norm.

Get a weekly update every Sunday with our announcements, company updates and a behind-the-scenes of what our community are building.
Over 13,000 people get our updates, join us!
You're in 😍- check your email to get started. Tweet me what you want to build to see how to do it without code.
Oops! Something went wrong while submitting the form.

Want to get your tool listed?

Submit your company and talk to us about partner opportunities.

Working in a team?

Bring the power of no-code to your work, automate tasks and ship faster.