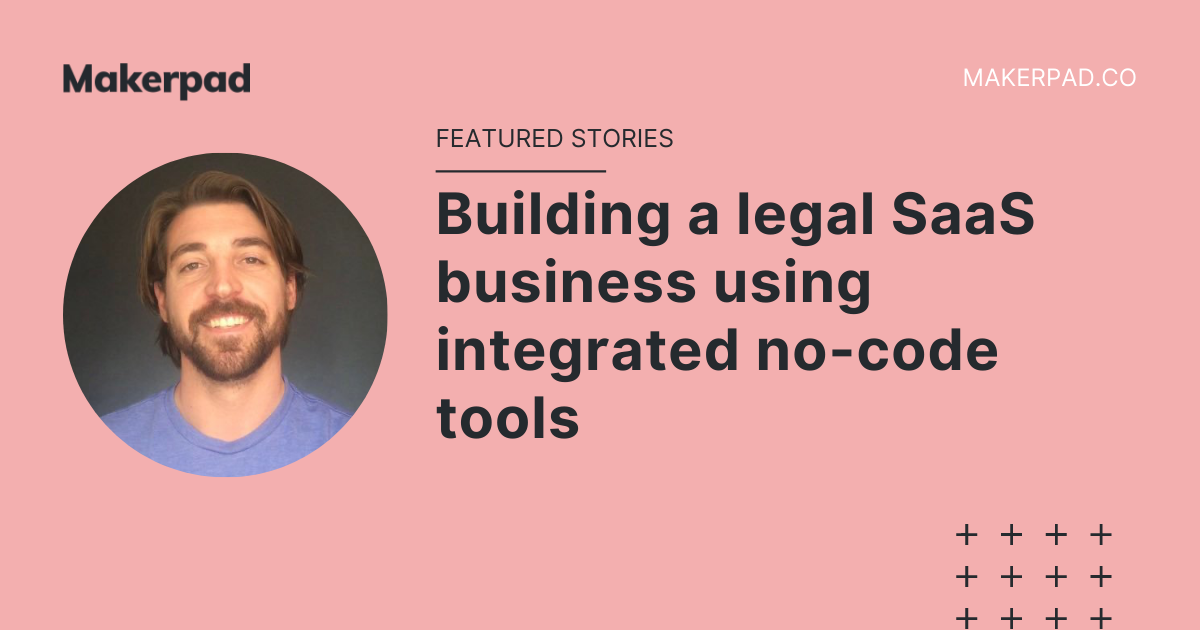 SaaS businesses can be extremely profitable, but building a product from scratch requires developers, sometimes a full tech team, that is capable of custom coding. Here’s the story of how a SaaS founder made the decision to switch from no-code, to custom code, and then back to no-code again to help save resources and boost productivity.

Hi! My name is Chad Sakonchick and I'm a Founder at BetterLegal, where I manage the strategy of development, automation, marketing, and operations.

I've lived within the world of CRMs, apps, and automation for close to 20 years; hiring my first dev off Rent-a-Coder (now Upwork) in 2005 while working manual labor at an excavation company during the day. I've lived in Austin, Texas for nearly 40 years.

When I was 5, I desperately wanted a Nintendo and instead, I got a computer! I've always been a tinkerer and have dabbled in programming, but found it didn't move fast enough for my ideas. Now that no-code has matured, I finally feel like I've captured lighting in a bottle and am excited to continue to push the limits of what can be created.

BetterLegal is a business formation service. We file LLCs and Corporations for new business owners, obtain their EINs, generate the new businesses legal documents, act as their Registered Agent, handle annual compliance with their state, and manage ongoing state filings as the business evolves.

The legal hurdle we help solve

Full-time legislatures may have changed a paper form 3 months ago, but the web admin hasn't updated it on the website yet. What makes us different is that a vast majority of our filings are automated instead of relying on rooms and rooms of humans filling out the same forms day in and day out.

Originally, I was trying to help an attorney friend of mine be more efficient so he could charge a more affordable rate and thus earn more clients for his new solo law firm.

After lowering his time spent on a new business from 3 hours down to less than 10 minutes, he was making more money per minute while charging 75% less per new business formation which led to the creation of BetterLegal.

Our team uses no-code tools to build their own filing automations which frees them up to manage many more customers, while also providing more time to handle their individual needs.

Everything we do is in effort to minimize the amount of unnecessary communication between customers and BetterLegal so we can fulfill their needs more quickly, accurately, and affordably. We do this through education, automation, AI, and no-code.

BetterLegal went from no-code to custom code, and back to no-code again in its 5+ years as a business.

I originally spent a month with Typeform, Zapier, Asana, and WebMerge (now Formstack) to build the BetterLegal 1.0 which walked every customer through an "explain it like I’m five" questionnaire that generated a task in Asana with a 40-page legal document.

The issue with this initial version was that if customers wanted any changes, we had to make them directly in a very long legal document. We needed a way to store the data in a system then output the legal document when it was ready.

BetterLegal 2.0 replaced Asana with Salesforce, which allowed us to edit the customer's entry prior to generating the necessary legal docs. The issue with this system is that we wanted to provide a dashboard to clients so they could view their information, filings, and documents themselves at any time and request changes.

At the time, we were paying Salesforce $4k per year for a handful of user logins. After many conversations with our sales rep and evaluating Heroku, it was cost prohibitive to move forward with Salesforce, so we decided to build BetterLegal 3.0 with custom code.

After half a year of development, we were able to move sideways from BetterLegal 2.0 to 3.0. It was a hard pill to swallow knowing we didn't create anything new in that time, we simply recreated what we already had.

At the time, the benefits allowed us to provide a customer dashboard and the ability to create anything we wanted moving forward.

The decision to switch back to no-code

One very useful feature we built that helped define our service was a Chrome Extension that allowed our Ops team to build their own filing automations through drag and drop which exported YAML that could be uploaded to an open-source automation engine.

This feature allowed us to return a formation in New York within one-hour of a customer's purchase. For comparison, the 20-year old, $3B LegalZoom takes 5 to 20 business days to accomplish the same feat.

In the three years we built and ran BetterLegal 3.0, we spent over $278k on developers with 70% of that in frontend development costs. With each new feature we built, the dev costs increased and timelines slowed. In January 2022, frontend dev costs were over $10k and our newest feature, the partner portal was 4 months late.

It was this partner portal which convinced me that we needed to move back to no-code. The MVP of the feature was built in a few days with Google Sheets, Zapier, and Lob (lob.com) and handled the physical mailing of all checks to our affiliate partners.

It worked marvelously, but again, we needed an interface for our partners to log into for transparency. We handed the MVP to the developers and requested an exact replica of the functionality, but within our existing system. We provided an entire month for two frontend devs (one 40hrs/week and the other at 20hrs/week) to rebuild the system without interruptions.

This experience made me realize that unlike plumbing or electrical in a home build where you can see the entire system before the drywall goes up, code is built in a black box. Once you fully rely on developers, you are fully at their mercy.

At the time, the company was in a very bad place financially and BetterLegal's board instructed me to cut all development costs to the bare minimum. My co-founder's exact words were:

"If we don't touch anything we can just run on what we have indefinitely."

The hard truth about building software

It’s not just building – it’s maintaining, fixing, and upkeep too. I understand how he might have made this assumption, but it isn't true. Servers, packages, Zapier code steps, Twilio's APIs all require upgrades and maintenance eventually in the same way your iPhone refuses to run older unmaintained apps.

My co-founder and I walked through our financials at a coffee shop and I was given a shoestring budget for future development work, one that was roughly 20% of our current spend.

So how do I cut costs, remove our reliance on developers that build in a black box, and not let the software slowly fade into disrepair?

After spending an hour with bubble.io/lessons and roughly 10 hours with Kieran and Pablo's Bubble Crash Course, it became clear to me that no-code had matured enough to handle all of BetterLegal's needs and future aspirations. Turns out, that we weren't in a bad place financially, our operational costs were simply too high and no-code could now solve this problem.

In 90 days, a few of us rebuilt the entirety of BetterLegal 3.0, the partner portal, and a task management system that all works within one interface. With BetterLegal 3.0, we still were reliant on Asana for non-standard requests from customers.

BetterLegal 4.0 brings everything under one umbrella with the following stack:

My parting thoughts: Build for what your customers need, not what you think they'll want in a year.

Blog Posts
SaaS
Community Stories
What's your story?  Tell us how you use no-code
Want to contribute to Makerpad? Learn more.
Something wrong?
Suggest a change