What is no-code? A simple guide to how no-code works 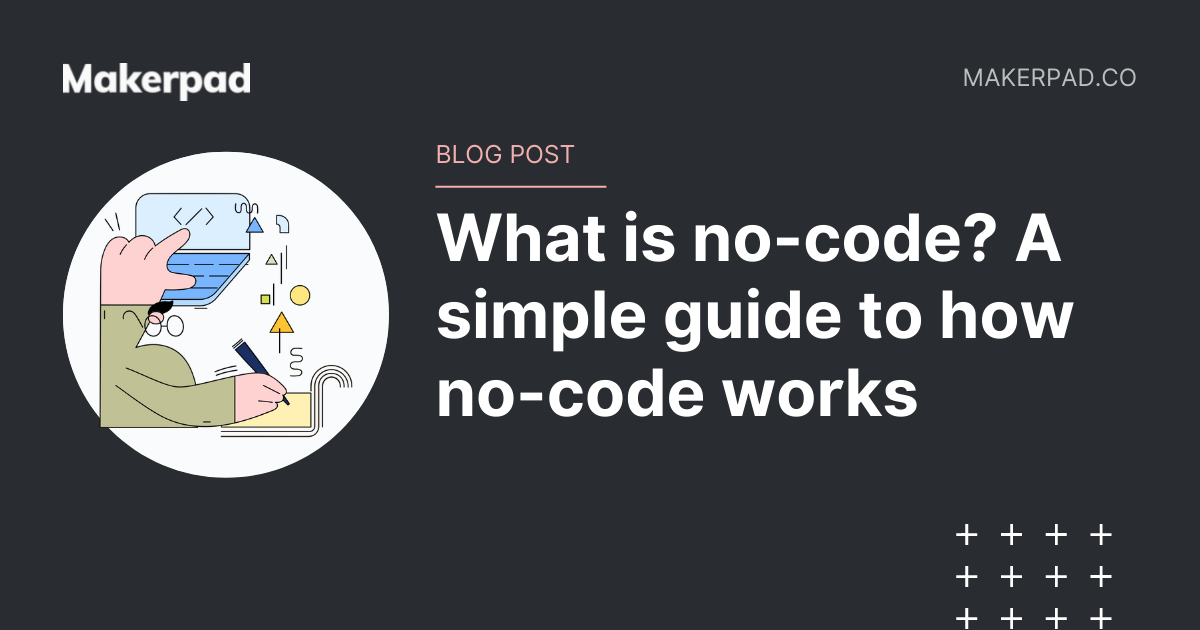 No-code is a term used to describe a method of creating software, such as websites and apps, using visual drag-and-drop interfaces instead of code. In other words, no-code allows anyone, regardless of their technical ability, to build on the internet.

And by “build on the internet” we mean creating your own infrastructure that brings your ideas for web-dependent projects to life. It could be an app, an online business, a game, a community, or anything else in between.

No-code as a movement is grounded in the belief that technology should be accessible to all, rather than limited to those with specialist knowledge. Imagine a world where anyone can spin up a mobile app, launch a startup, or automate all elements of their business with ease — that’s the foundation upon which the no-code movement rests.

It wasn’t all that long ago that the ability to build an app was saved only for experienced developers or those with thousands of dollars to spend on hiring them. If the average person had an app idea, that idea would typically be thrown out, since the average person had neither the knowledge nor the budget to bring their idea to life.

But that’s all changing thanks to the rapid surge of platforms, tools and apps that allow average people to build almost anything they want. And we’re not just referencing entrepreneurs and non-technical founders here. Nowadays, most businesses are software businesses at least to some degree.

No-code is changing the way people create, launch and run businesses that utilize the internet at an unprecedented scale.

In a way, no-code is an extension of code that simply makes computer manipulation easier for the masses, rather than just developers and engineers.

Strip computer programming back to its core, and it all exists on one language: binary (or “0s and 1s” as it’s more commonly known). But writing in binary is tedious, and so coding languages were created to help people manipulate computers more quickly and easily.

No-code takes this a step further. It allows anyone to manipulate computers using visual interfaces (that are written using coding languages) to design what their software will look like, and if-this-then-that statements to determine what happens to the software and when.

“No-code” as a term is actually a little misleading, since the visual interfaces people use to build without code are built on lines of code themselves.

No-code is not anti-code either — the tools used by the no-code community are very much the product of talented engineers. In fact, you will often find engineers within the no-code space either using no-code as a way to conserve coding resources for mission-critical projects or as a reprieve from the technical aspects of creating.

Visual drag-and-drop interfaces enable programmers and non-programmers to build their own applications, run businesses, and automate work processes, without needing to write code.

What can you do with no-code?

The exact possibilities are endless with no-code tools and certainly too many to list here, but here are some examples of things you can build and do with no-code:

There are many varying reasons why someone might choose to use no-code over other options, but there are a few common characteristics that apply in all instances.

No-code tools are built for speed and efficiency by abstracting the difficulty and complexity of coding away from building a product.

No-code tools allow anyone to design and build their own product without having to hire a developer or spend lots of time learning how to code themselves.

No-code allows people with varied backgrounds, like creatives and makers, to build their own products and bring them to life on the web. No-code doesn’t discriminate. You only need a laptop and internet connection to start building with no-code tools today.

No-code tools give people the ability to build their own software without having to write code by hand. A wide variety of no-code platforms and tools exist, covering everything from business intelligence to team collaboration.

“Low-code” refers to the slightly gray area between zero code and code. Sometimes, you might need to use lines of code here and there to get something done, but we would still consider that to be no-code if you’re using a tool with an entirely visual interface.

The main difference between low-code and no-code is in the tools themselves. Low-code tools differ from no-code tools in two ways.

How to start building with no-code today

Thousands of business ideas die a death because founders don't know how to move beyond the idea stage. With no-code, you can start building small and test ideas rapidly — even with no technical experience.

How you start building depends on what it is you want to build.

Let’s take a look at a few types of projects you might want to create and how you can start building them today using no-code tools. These are just the tip of the iceberg.

Using no-code tools, building your own mobile app becomes incredibly easy. Building an app without code might sound like a complex and unattainable project for a non-technical person, but tools like Glide, Adalo, and Universe make it simple.

With these no-code mobile app builders, you use the drag-and-drop platform to build the design of your app, and ‘if-this-then-that’ rules to set the conditional logic of your app.

A productized service is any service that you could provide — typically skills like copywriting, consulting, design, etc. — and delivered to your clients in a scalable way. Using no-code tools, you can set up infrastructure that allows you to deliver your service as a product again and again.

Today’s website building tools let you create entire websites using a visual canvas. Depending on what type of website you want to run, you can build anything from a simple site that displays information or captures email addresses, to a site that has a CMS, integrated payment capture, membership features and gated content, complex logic, and more.

Whether you want to sell physical products or digital goods, no-code makes eCommerce simple. You first need to think about what it is you want to sell, and how you want to sell it. Do you need a robust platform for selling multiple products with SKUs, inventory, offers and promotions? Try Shopify! If you have digital products to sell like courses, digital merchandise, or membership to access your community or gated content, try Gumroad.

The Getting Started with No-Code course by Makerpad & Zapier is a free beginners’ curriculum covering all the basics of no-code. It teaches you how to build a multi-page website, a database, an automation, and a mobile app — all without any code.

It has been created for anyone wanting to build profitable internet businesses but lacking the technical knowledge to do so.

The curriculum is designed to take a beginner from knowing nothing to understanding the basics of no-code. By the end of the course — assuming you complete all modules — you’ll have a working knowledge of common no-code tools and be able to build a simple website, a database, an automation, and a mobile app. You’ll also understand how these frameworks tie together to power businesses. All without any code!

Students who successfully complete the course will also get a certificate of completion after graduating.

It’s a self-paced course, meaning you can work through the modules in your own time. This makes it ideal for full-time people and those with busy schedules. What’s more, it’s completely free. All we ask is that you share it with others if you find the course helpful and think they will too.