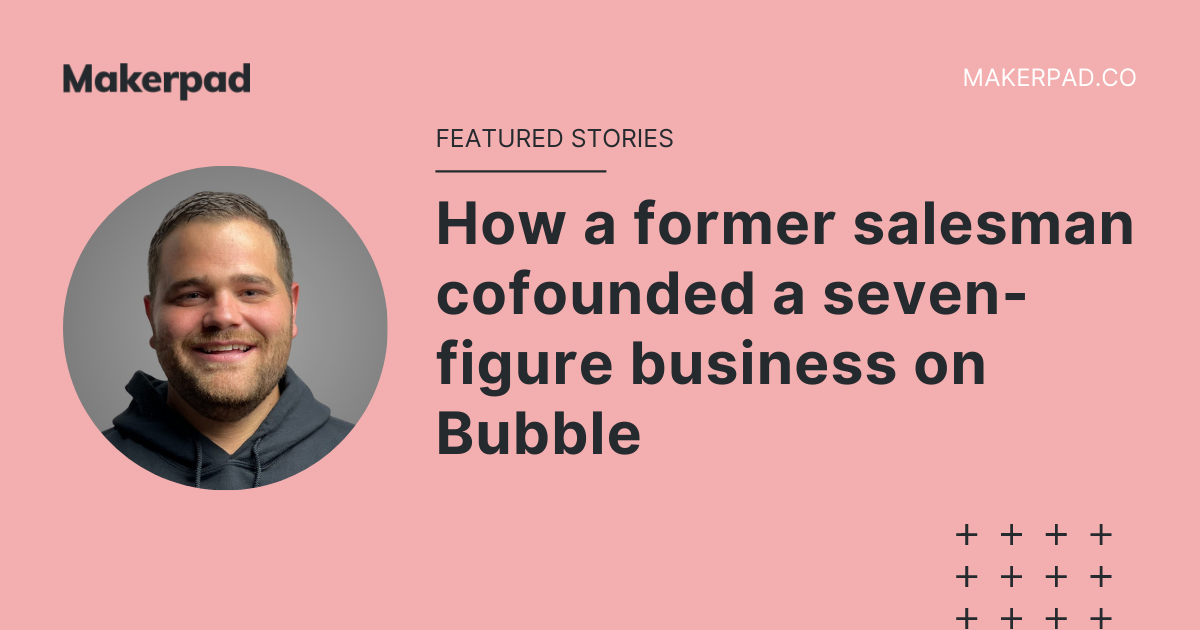 Here’s the story of how no-code enabled a former solar panel salesman to build a successful no-code business that has since scaled to seven-figures!

My name is Jordan Richardson.

I’m a former college football defensive lineman, family man, and somehow can do the splits both ways 😆

I'm the founder of #NoCode Advantage, where I share everything I've learned since co-founding Revetize, a software company that was accepted into AngelPad and is now valued at 7-figures (and counting!)

I built it completely with no-code.

Also, fun fact: I’ve also built a Wordle clone on Bubble! Give it a shot!

The start of my journey

Just a few years ago I was bouncing around different careers, always dreaming and never really doing. I was a ‘want’repreneur – and I had worked my way up in a solar company by knocking doors and begging homeowners to buy rooftop solar panels.

I was doing okay, but it wasn’t really my passion. I DREADED getting out of bed every morning, and my boss knew it, so he called me into his office. He asked me if, since I was sick and tired of knocking doors – if I would like to head up the operations of a new side “Smart Home” company he was thinking about doing.

He basically wanted to complement his solar business with smart thermostats & LED light bulbs. I was grateful and took the new opportunity.

Suddenly I was driving all around, visiting homes all over the area; screwing in light bulbs, and installing thermostats.

It was a cool switch up, and I was grateful for it. But I can still remember that nagging feeling deep inside. I knew I should be contributing more to the world than this – that I had more to offer – that deep down I KNEW I wasn’t on the career trajectory I wanted to be on.

I remember one night after work I received an email that mentioned a new no-code tool called Bubble, which allows you to build software, like complex, real, custom, scalable software – all without having to write a SINGLE LINE OF CODE!

I was super intrigued. I couldn’t stop thinking about it!

And then, the very next week, my solar boss told me about this random software idea he had that would help our company with marketing – and could maybe even help other local businesses like ours.

Even though I didn’t really know for sure what this Bubble tool could do, I told him I think I can build that for you! I decided then and there that no matter what, I was gonna learn Bubble and make this startup (called Revetize) work.

So, I dove in. We ended up becoming co-founders and business partners at Revetize, and to make a long story short, within 2 months of learning, breaking stuff, learning some more, testing this, and trying that… I finally had a working product up and running.

The main components of our product are Bubble.io and Zapier, but we also use services like Plivo, and Mailgun (thinking about moving to Postmark).

In my opinion, a huge chunk of an entrepreneur's role is simply finding ways around/under/over/through obstacles. I owe a huge debt of gratitude to Richard Bitton, my cofounder at Revetize, who taught me that if there's a will, there's a way!

And he was right – after just two months of discovering Bubble, we made our first sale for a thousands bucks annually and we were off to the races.

Scaling our business and getting $300k ARR

So then, we kept selling and kept iterating on Revetize. Within a year, we had amassed a customer base that was paying us around 25 grand every single month (about $300,000 ARR).

We were accepted into the AngelPad tech accelerator program and were off to New York City to learn how to really take our startup to the next level.

We had a real, tangible business! And somehow, with pretty much zero technical background, I wound up as the CTO – without knowing the first thing about code.

That’s the phenomenal thing about no-code!

I remember when I was on that airplane to New York I wanted to pinch myself, trying to figure out if this was real life. I mean, just a year prior I was screwing in lightbulbs for a living.

Now, I was suddenly accepted into one of the most prestigious startup accelerator programs in the WORLD! Revetize was valued at 7-figures, and we were about to be pitching to VC firms like Sequoia, Homebrew, Shasta, Pear VC, and more.

Talk about a crazy transformation!

I can’t say enough about no-code!

I’m telling you, this technology is the future. I wish I could say I’m some prodigy or genius or something, but all this success happened simply because I stumbled upon a crazy good form of leverage: No-code. And it gave us a massive advantage.

There are only 3 metrics that really matter in software: Traffic, Sales, and Churn. Everything else are appendages to those big 3.

I feel like a lot of tinkerers and dabblers make cool stuff, but are frustrated without startup traction. I feel grateful to have seen both sides intimately, and I hope to marry the two with my academy and unveil everything I've learned while running a 7-figure tech business without writing a single line of code.

With my academy, NoCode Advantage, I’m about to pull back the curtain and totally unveil everything I know on the subject of no-code, tech startups, making sure your idea is good enough to sell, then actually selling your software, and everything in-between, so you can harness this new superpower for yourself, and hopefully achieve similar results!

And finally, my advice to makers, entrepreneurs, and anyone trying to change the world: Be a painkiller, NOT a vitamin. Be perfect for someone, and not just okay for everyone.

Thanks for sharing your inspiring journey with us, Jordan! You can connect with him on LinkedIn or on Twitter!

👨‍👩‍👧‍👦Personal CRM - keep track of people in your life
Close