How no-code helped a product manager pivot into holistic healing 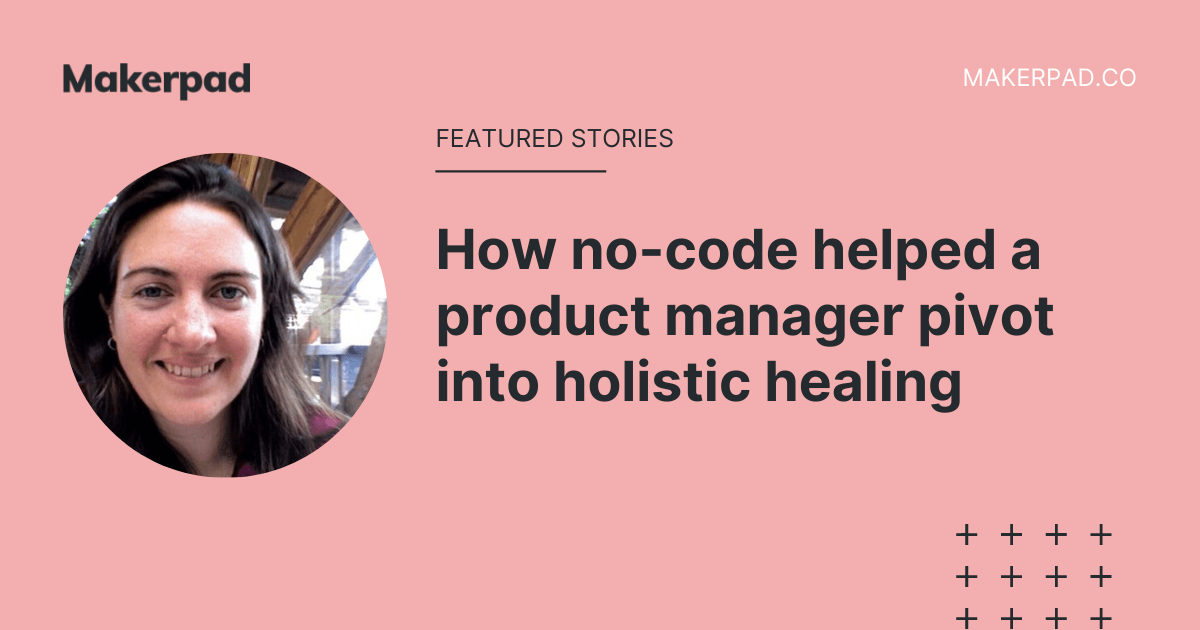 I'm Katie, a low-coder, turned no-coder :) I'm currently a Digital Product Manager for a health system up in the Pacific Northwest.

I've been building websites for over 15 years now in various roles (Digital Marketer, Project Manager, Consultant), but have always struggled with what to call myself. I'm not quite a coder; not quite a designer.

I know just enough HTML/CSS and have the marketing chops to back that up to create decent websites for small-to-medium sized businesses. I've been able to get by with building sites on WordPress, Drupal, Shopify, and Squarespace. However, there is still a bit of a learning curve and a lot of trial and error to get things just the way you want.

Just before the pandemic hit, I got the idea to start my own business.

I've always wanted to combine my skills in digital marketing with my passion for holistic health. That's when I came up with the idea to build a holistic healing community platform.

I took an entrepreneur bootcamp that resulted in a business plan and pitch deck. However, I was faced with the question of how to build my idea on a bootstrap budget. I had planned on building the site using WordPress and then hiring a developer to add on custom development. Luckily one of the bootcamp presenters warned us not to go down the path of custom dev because the costs can add up quickly when you're still in the concept phase.

I found out about Makerpad’s No-Code Fundamentals course through my interest in using Circle as a potential platform. I had never heard of the term “no-code” before, but it totally makes sense as to where the evolution of the internet is going.

The course sounded like the perfect next step on my journey.

I had a mystery illness for 3 years when I was just out of college. After getting fed up with no diagnosis from multiple doctors, I finally went to see a naturopath. I was diagnosed within a week and after some dietary and lifestyle changes, I was back to my healthy self.

That changed my whole perspective on healthcare.

Ever since, I've felt the call to spread the word about alternative, root-cause healing, and to promote and facilitate connections with amazing holistic providers that, I've come to learn, are so important to your healing journey.

My idea is to build a platform that will include a provider directory, resources and information on modalities, a marketplace for providers to sell their products, and community spaces for providers to collaborate and patients to meet others with similar conditions. It will be free to search the directory, resources, and marketplace, but we will have a membership for additional community features.

Throughout the No-Code Fundamentals course, I chose to try out a new tool for every assignment. That gave me a chance to play around with what was out there.

However, when it came time to build the final project, I had less than a week to build something.

I originally planned on using Webflow, Airtable, and Jetboost. I started by going through Makerpad's Product Hunt tool-path and realized there was more of a learning curve with Webflow than I had anticipated. With limited time, I had the option to power through and just get a directory up or find another tool.

One of the valuable lessons I learned from the Makerpad course (and got to apply to my work) was to "build fast, build often". Therefore, I switched gears and decided to try out Softr + Airtable and I'm glad I followed the urge to pivot.

I'm pretty happy with the way Village Health turned out, especially with only a handful of days to build. I was able to build out a directory, modality resource list, subscription plans, and a member dashboard. I plan to add more community features in the near future.

I was super impressed with Softr. I had become a fast fan of Airtable at the start of the course and knew I wanted to use that as my main database. Softr is built specifically for those using an Airtable database.

I started with a template, but as soon as I got to playing around, I realized I didn't really need it since they provide the basic building blocks like hero images, lists, CTAs, galleries, pricing lists and more. At first I was a little apprehensive about not having the ability to customize the design as much as I would with a tool like Webflow, but actually the limitations helped me build and test faster.

Softr does allow for custom CSS code too, so eventually I could make tweaks to the design if I feel so inclined.

With Softr, there were also a number of pleasant surprises as I dug in deeper.

It has a built-in library of free icons, illustrations, and stock photos which actually saves a lot of time. It also has basic membership features, and it integrates really easily with Stripe. Anything that reduces the amount of tools in my tech stack is a win for me.

It's crazy to think that I built all of that in 3 days. If I went my traditional WordPress route, I'd probably still be fumbling around with which plugins to use, trying to fix CSS code, and wading through community forums to answer integration questions. I almost felt guilty that it was this easy... but I quickly got over that :)

If you are looking for a quick way to test your ideas and don't mind some design limitations, I highly recommend Softr. It's super simple, with zero learning curve. I didn't even have to watch tutorials or go down the support rabbit hole. Everything was very easy to understand.

They definitely specialize in directory type websites, but they've already rolled out a number of new features since I built my prototype, so I'd imagine you'd be able to find a number of great use cases for it.